Could you help a dog?

Breaking radio silence because this could help:

octoberland of Salem, Massachusetts has been caring for, and trying to find a home for, a now three-month-old male Boxer/Staffordshire cross named Shadow.

octoberland first put out a call to find a home for Shadow last month, after she'd rescued the dog from a potentially bad situation. He's grown since then: 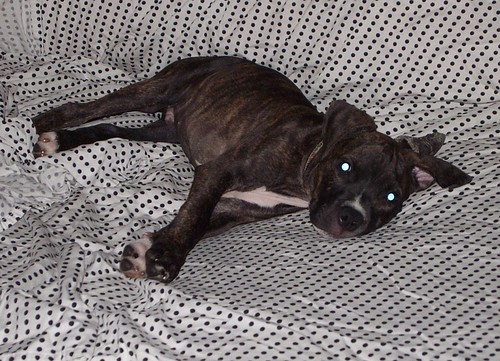 Here's an updated photo set of him.

octoberland is doing what she can to re-home Shadow; she hasn't found him the right home yet, but she's still trying. She's wonderful with animals and wants to do right by them, and if you can help, please consider doing so. Could you get over to Salem, MA? Do you know someone who would be a good owner to him?

Edited To Add: An article about Shadow. This is probably the better link to use: http://salem.patch.com/articles/shadow-is-looking-for-his-forever-home
Subscribe
Comments for this post were disabled by the author