So, someone wanted roses...? 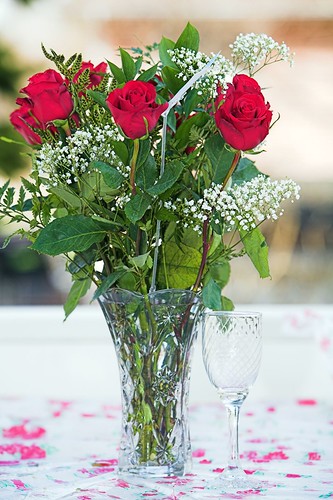 Today marks the eighth anniversary of the last episode of one of my favorite TV shows of the Nineties, Cupid. (Yes, Valentine's Day. The ABC scheduling executives must've been praying to the Gods of Irony.)

Jeremy Piven plays Trevor Hale, a man who appears without any record of his identity, and who may or may not be Cupid, the God of erotic love, banished to Earth to earn his way back into the gods' favor by doing Cupid's work without Cupid's arrows. He also may or may not be nuts, which is where Paula Marshall comes in as Dr. Claire Allen, the psychologist and relationship advisor who gets to know him. Trevor (who apparently comes up with his name on the spot one day, seeing a quote about "tremor and hail" -- and by the way, the name "Trevor Hale" anagramizes as "Heart Lover") and Claire forge an awkward sort-of-friendship with a hint of tension that could get sexual -- like Moonlighting without the final letdowns of that show's last season. Because, of course, Cupid only lasted one season.

Point blank: there wasn't a single bad episode of this show. Seriously. I fell for it immediately upon seeing the pilot (paired with the remake of Fantasy Island, which had potential -- and, hey, Madchen Amick (about whom my high school friend Mike Keegan once said "Three words: Queen of Babes") -- but never quite gelled for me). And Cupid actually got better from there. It was funny, romantic, dramatic at times (like the transplant episode), and wonderful at capturing the frequent weirdness and awkwardness that happens between people becoming friends or lovers. (I still remember Jeffrey D. Sams (hey,

celticfeministw, a handsome guy who's from Cincinnati!) as aspiring actor Champ, looking askance at a woman he's dating who's geeking out over Quentin Tarantino's acting abilities, an admiration Champ, um, doesn't share.)

I still have a couple of Cupid episodes on tape from when they first aired. I contributed a small amount to a fan campaign to buy an ad exhorting ABC to save the show; when we got the word that the show would be cancelled no matter what, our donations were instead sent to the Elizabeth Glaser Pediatric AIDS Foundation. This show is special to me.

More and more of Cupid's alumni are making a strong impression -- Piven's career finally went high-profile so that he was more than the "John Cusack buddy," creator Rob Thomas (one of the early TV people to have a personal website) went on to create Veronica Mars -- and I really, really hope similar good fortune finally reaches Marshall, who I became an instant fan of and who makes me ask "Why isn't everyone else a fan of hers?!" Seriously, I remember a moment when I thought "Why does Marshall remind me of Madeline Kahn?"...to invoke the name of another funny, formidable actress.

Here's the Wikipedia page on Cupid.

Cleaning out old e-mails, I happened upon a link to that famous "Dr. Seuss technical support" poem that's on the 'Net...

And for the first time, I saw that that was NOT the original, full version of the poem, and that it was written by Gene Ziegler, a Cornell University professor back in 1994. And...

copperwise is OK. The cyst was not attached to anything inside her and came out about as smoothly as can be done. (More details are here.)

My mom’s mother, my Grandma Dorothy, passed away this afternoon.

Dad told me tonight (when I called my folks on an unrelated thing). Long story short, Dorothy started having trouble yesterday. Mom and her sister Pat went to see her at her assisted living home, and saw the shape she was in. Hospital help was ruled out; hospice care came over; people did what was needed to make Dorothy comfortable and safe. Both Mom and Aunt Pat were with her at the end, in her room. Mom held Dorothy’s hand.

Dorothy was the last of my four grandparents to pass away. Like the others – Grandpa Bob (her husband), Grandma Jean and Grandpa Irv – she had a long life, and a good life, and was surrounded by people who loved her and looked after her. And who’ll remember her.

I’m glad I spent a lot of time with my grandparents after I moved to Oregon (14 years ago – wow). I often stayed at Dorothy and Bob’s home in NE Portland. Their house was, in fact, where I lived during my first three weeks of life; Mom went to Oregon to have me, so she could be around more family (Dad was on an aircraft carrier until a few days after I was born). And in the ’70s and ’80s before I moved back, I was able to visit them plenty of times: lots of vacations.

You would’ve liked the both of them: usually quiet, usually quietly funny, good with pets and flowers (Dorothy maintained the flowers along the front stairs well into the ’90s). They had reason to be proud of their four daughters (raised in a three-bedroom house with one bathroom, I might add), who are all still around and healthy and in touch. They created a good family.

I love this photo from 2004, when my brother and his family visited Portland. He, Cindy and their boys visited Grandma Dorothy in her bedroom. In the photo, she is staring and grinning at my nephew Robbie, who’s returning the look. They’re both fascinated with each other. There’s a spark. She was good with kids, too. You surprised? One neat thing: some of her caregivers are new parents, and so for the last few months Dorothy got to experience a young one around the house. That brought extra happiness.

We’ll figure out Grandma Dorothy’s memorial later. We, of course, won’t do it without her youngest daughter, my Aunt Nancy Weare, who lives in Guam. So we’ll do it when she can get from her side of the world to here.

In the meantime: Grandma, I love you, and I miss you.
Collapse