You want Lisa and Brian Wood of Big-Ass Sandwiches as your bosses. Because if you work well for them, as I apparently have (keep it up, Chris!), you can get really neat treats. Like getting into a comedy club performance by actor-comedian Patton Oswalt.

I'm also lucky to have gotten to say hi once again to the fantastic Daria Eckhardt Eliuk (longtime Portland media person; I've been a fan of hers for years) and her often amused husband Dallas Eliuk, who were sitting mere feet away. (It's always nice to get a hug from Daria; truth!) I was lucky as well -- there's that word again, lucky -- that the (as far as I know) unannounced MC for Oswalt's appearance was funny man and good guy Ron Funches, a Portland comic who's friends with both Oswalt and the Woods. (Sample Funches! Here's him talking about Muppet Babies.) He was especially a surprise as he had his own show later that night, a farewell show as Funches is moving to Los Angeles as I type this. Lisa had been stressing a bit about how quickly she could get from this show to that one, and then there was her friend strolling out with a mic and a water bottle to huge, appreciative applause. Hugs happened later for the two of them, probably at both that show and his later farewell show. (Lisa also got to hug other friends of hers, like -- heed this,

shadesong! -- Storm Large. Who's another of the good people.)

Oswalt did bits and routines on why people when they're older start to fixate on World War II, his one encounter with a prostitute from back before he met his future wife, Portland's pun-heavy food cart names, the time an audience member stood up not to heckle him but studiously critique him, how the Germans he's known don't realize when he's joking (his explanation of why that might be had me gasping laughing), and more. Lots of jokes, lots of thoughts, and one of Oswalt's trademark composition notebooks (as pictured here) open on a stool in front of him. At least one thing he said led to me laughing about a particular topic for maybe the first time in my life, and that's special and to be treasured. (Kind of like when Dave Chappelle in his wonderful film Dave Chappelle's Block Party managed to make me laugh about that evil asshole who was the D.C. Sniper.)

After the show, there was a final bit of happy luck: I got to be in the green room as Oswalt met the B.A.S. cooks and supporters (including Ryan Pollard, who's designed posters for B.A.S. specials) and visit with Lisa and Storm. Oswalt praised Lisa on the homemade vegetable ratatouille that she made for the topping of that week's B.A.S. special. (It was dedicated to Oswalt and called "Bratatouille.") Turned out Lisa had never made ratatouille before last week. I said maybe she's a ratatouille prodigy. I'd eaten the special, too, a few days earlier. It was goooooooood.

And the friendship on display in that room was also good.

A moment is even preserved below. I was in a small room with Patton Oswalt! Lisa's photo speaks truth: 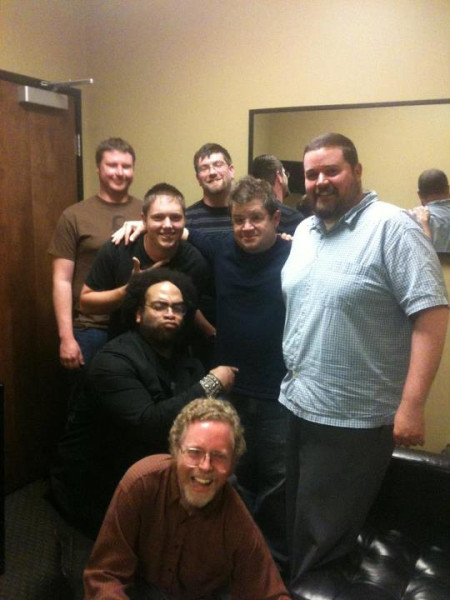 And yes, I was still laughing. Grateful laughter that I'd gotten to be a part of a good moment.

If the Alliance had pumped bacon smell into atmo instead of the Pax, none of that would've happened!