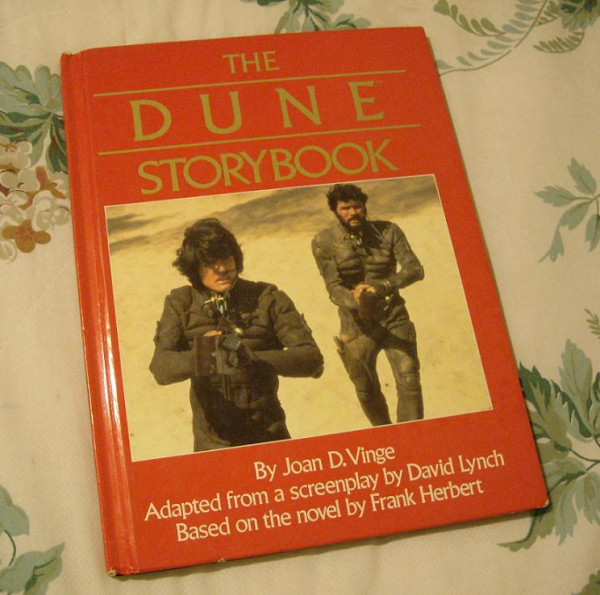 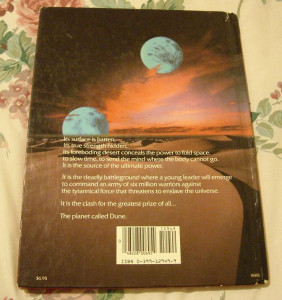 I saw the book maybe once in the children's section of the Vienna, Virginia library branch, probably soon after David Lynch's film adaptation came out in December 1984 to not-exactly-world-beating box office. Now, later in the '80s I saw the film, and liked it quite a bit; it probably made me more primed to try Twin Peaks sight unseen, and I feel in love with that show. (I was still too young in 1990 to feel comfortable seeing Blue Velvet, whose reputation kind of scared me.) I was already a budding science fiction fan, thanks to Star Wars, Star Trek, Arthur C. Clarke and the Norby books by Janet and Isaac Asimov. But I think 11-year-old me was daunted by the amount of info in the pages; this book has pretty thick paragraphs for a 60-page-long children's book. Dune in general isn't a kid-friendly story, either. Joan Vinge had adapted it from Lynch's screenplay based on Frank Herbert's novel, and that amount of translation may have been a little much for my pre-teen mind. The condensing of the story for purposes of making the multi-hundred-page original story fit into 60 pages makes it seem like the evil Harkonnen invaded the planet Dune a day after House Atreides moved in, for example. Anyway, I didn't read it back then. Neither did many people. Or, of course, see the movie. (Few people bought the Dune toys, either.)

But I kept remembering the book, so it's good I ran into it 15 years later, in 1999 or 2000, at a La Grande, Oregon used book store. I couldn't resist buying it. This copy had belonged at some time in the interval to a "C. Lauler," as I know from the inside cover.

Vinge included parts of the story that were shot for the film but then cut out: the awkward meeting between Dune-native assistant The Shadout Mapes (Linda Hunt with a knife) and Lady Jessica Atreides:

"My lady..." Mapes held up her hands. "I brought the knife as a gift, in case you were the one our legends promised us."

"And you brought it to kill me, if I was not." Jessica waited.

Tense first meeting for anybody, I know. And later, the book also includes a sequence involving the death of a baby sandworm in order to generate the mind-altering Water of Life, a sequence not restored to the film until the odd, Lynch-disowned TV re-edit of the film from 1988; I think this book was, for years, the only public evidence the sequence had ever been shot.

The book's photos also remind the reader that for some reason, the royal House Atreides keeps pugs, suggesting that Lynch was a Portland hipster 28 years early. This addition to the world of Dune got discussed here, because Internet.
Collapse