Discovered as I went through me-stuff at the folks' place earlier: 1) I'd accidentally bought two copies of David Gerrold's A Rage For Revenge; 2) I didn't have the patience at that moment to go through college essays and eighth-grade writing assignments, so I'll look at those another time; 3) my yearbooks from eighth through 12th grades; and 4) one piece of poetry I wrote in the fourth grade. At least it's short; it's also possibly the first thing of mine to get published (it was either this or these short pieces I did for my fourth grade school's newspaper).

The sun is blocked
By the cloudy day.
And everybody talked,
They all had something to say.
All about the blackness, all about
As if the night had come to shout,
Grey and gloomy anyway,
On every single cloudy day.

I actually didn't live in Oregon when I wrote that: I was at Trantwood Elementary in Virginia Beach, Virginia.


© Christopher Walsh, 2012. Unauthorized use and/or duplication of this material without express and written permission from this blog’s author is strictly prohibited. Excerpts and links may be used, provided that full and clear credit is given to Christopher Walsh (chris_walsh) with appropriate and specific direction to the original content.

Events! Events have been happening, and I've gotten to some of them.

One event involved food and beer. The Row*, the new food cart pod Big-Ass Sandwiches moved to, had its grand opening Friday night. Big-Ass started Wednesday, but that's the day most of the other carts (at least one more to come) opened, and they did it in style: DJ'd music, Hopworks giving away beer under the same tent where the DJ was, and lots and lots of happy people. I had my first KOi Fusion tacos, then beef poutine from Potato Champion. The vibe at the event was pretty good, even when it rained. Of course, warm food and cool beer helped.

After that I walked and bussed over to the Bagdad and joined another good crowd, this time for Cort and Fatboy's screening of Back to the Future. That flick still plays well: we not only laughed a lot, we cheered a lot. And I was happily reminded just how good a screamer Christopher Lloyd is. By that time of night, I was fading in and out, so I missed laughs and lines; I also missed my chance to check if someone really was in the background in the scene analyzed geekily in the essay "The Other Marty McFly." Still: ahh, time travel stories are FUN.

Yesterday after taking time to wake up I got to my parents' (as previously blogged (twice!)) and gathered books and cleaned laundry**, then drove home. I got to one more event after that, a CD listening party for good local guy and musician Kielen King. His science fiction rap album Star Pilot's Revenge, his sequel to 2011's Star Pilot's Lament, is out, and he played his music for an appreciative crowd at Bridge City Comics in North Portland. And unlike for the Star Pilot's Lament listening party, he didn't get a visitor ask him to play someone else's music! Lots of smiles and laughs, as public gatherings should have. Thanks for always reminding me, guys, that having a sense of humor is a really good idea.

Today? A quiet day at home for me, it looks like. Plenty to do in this small studio.

* Informally, lots of us are calling it "the Superpod" -- the carts there make up a collection of what's almost a Portland food cart super group. Except for Big-Ass, each cart there is a second location for the cart (or multiple carts, including mobile, in KOi Fusion's case). It's going to be a relatively small pod due to space -- it won't ever take over two blocks like SW Alder/Washington and 10th in downtown, which is a glorious food cart pod.

I AM CHRIS WALSH AND NOW I WANT PIZZA. I WILL CRY UNTIL I GET IT. I WILL...

As you may have guessed by last Thursday's post, I was born Nov. 1st, 1973. I was born at Portland, Oregon's Emanuel Children's Hospital; Mom had moved to Portland for the final bit of her being pregnant with me so she and my older brother T.J. could be with family. Dad was serving on an aircraft carrier in the Mediterranean; he wasn't able to get leave and get to Portland until nine days later, but he did make it. Here's photo proof. Yes, that's me. 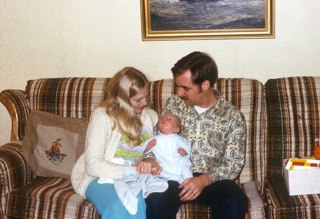