OK, Stephen King's 2001 novel Dreamcatcher is a mess. I've read it, that's my opinion, I stand by it. But. That said, I'm glad the book exists. I'm glad that book exists for one scene: the scene late in the book where Jonesy, possessed by the spirit (sort of) of an alien (really) that's forcing him to do something he really doesn't want to do, knowing that his friends are driving through a Maine winter snowstorm to find him and stop him, realizes he must slow himself down, which he does...

...by forcing himself to eat raw bacon. He stops at a quik-e-mart convenience store, blatantly shoplifts bread, mayo, and bacon in front of the stunned clerk, makes a sandwich right there, savors it going down, thanks the clerk, leaves -- then starts horking his guts out. Because, dude, raw bacon.

I so totally hope that as he wrote that, Stephen King was chuckling quietly to himself. Heh heh heh.

Later King sort of lamented the loss of that scene when William Goldman and Lawrence Kasdan adapted the book into that insane (more insane? less insane? I haven't seen more than a few minutes of it (though I read the screenplay)) 2005 movie. But Daaaaaaamn, that scene exists. And makes me smile evilly.

This is an excuse to share this: a bacon dreamcatcher. You're welcome. 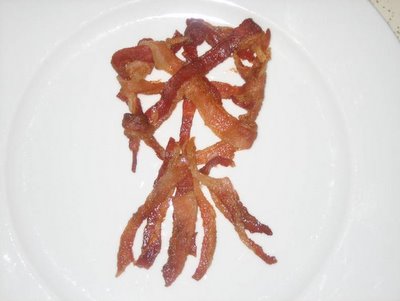 Source, which got it from here
Collapse