The last time Roger Ebert looked at anyone, he looked at his beloved wife Chaz.

The last time Ebert did anything, he smiled.

He died surrounded by love, and through however much pain he was living with, he felt that.

Ebert survived a lot. He got past his own alcoholism; he also committed to being as healthy as he could in the wake of many body problems *. From a profile written before his major surgeries, I learned he tried to walk at least 10,000 steps every day, because no matter what, that will burn a certain number of calories and help circulation. He knew that it would help, sometimes in small ways and sometimes in bigger ones -- and that it was so often a pleasure that not enough people afforded themselves. I got into walking that much (even using a pedometer for a while); I was happy to realize that 10,000 steps wasn't that much farther than I tended to walk in a day anyway. I also was happy to remind myself that walking often helped my mood, helped me process thoughts that needed processing.

Ebert wanted to take pleasure in the world. So he wrote about it; he traveled; he sketched; he argued; he joked; he engaged. His disappointment in what he found to be an unsuccessful film -- and he could be obnoxious when disappointed -- was often tied to having been denied pleasure from that film; move on to something else that might work better, please, so that he could take pleasure from that. And maybe take joy from that.

He found joy in many places. Thank you, Roger Ebert, for being so outspoken about joy. 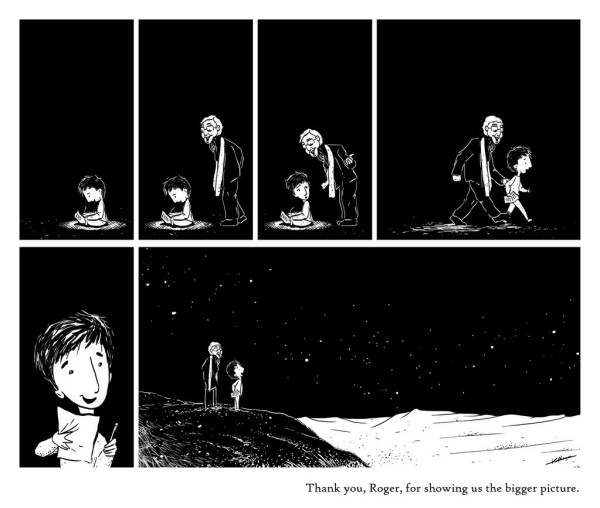 Art by Krishna Bala Shenoi, one of several Far-Flung Correspondents -- from India, in his case -- who Ebert invited to write for his site.

*...which he could still joke about. He and Gene Siskel appeared on The Late Show with David Letterman in 1994, when the show had a running gag about being sponsored by the fake product Big-Ass Ham. So the term "big-ass" was used a lot on the show then. And Ebert loudly proclaimed "I've got a big ass!" (Now I wish he'd gotten to say that in one of the fake ads for Big-Ass Ham. Had he been asked, he'd've been up for it.)
Collapse