It's why I'm happily tired, too.

This was the tenth year of Portland's Stumptown Comics Fest; I've attended since 2007. Of course I've been able to go to it more than once while most other conventions I've attended I've attended only once or twice, but it's true: it's a good con for me. A good size. Also very focused on independent comics and the writers and artists who make them. And since Portland is full of good writers and artists who love comics, Stumptown should be a good place, and a good time.

I got there both days of it, Saturday and Sunday. Saturday I paced myself: sat for a while listening to friends of mine put on podcasts, and took a break for a couple of hours to get food at the nearest food pod and also to just sit. (I went to the pod where Big-Ass Sandwiches is, though I ate at the Nikki and Lefty's cart (Greek) and Koi Fustion (Korean barbecue) instead of BAS. It's OK, the people at BAS know I'll always come back to them. I'm not actually cheating on them.) While there, both in the morning and then in the afternoon after that break, I visited lots of friends, acquaintances, and other cool people. Met people even. Quite a few of them I know from chats on Twitter, Facebook, and LiveJournal, so there's that helpful connection. Hey, I can talk to people in person, too!

More of this good stuff happened at the first night's party (once again at the awesome Jupiter Hotel), though I bailed right before a drawing contest started because I needed to take less than an hour to get home. Wish I could've stayed for that, but I'll try to get the next one -- they're a blast.

What I can say was a blast was the jam poster. Local artist Bill Mudron had the idea of making a poster that was a comic book page but with empty panels. You get the poster, took it around to seven different artists, and they'd each do a panel. At the end, voila! A story in pictures. Here's what I got (with me giving no guidance to any artist): 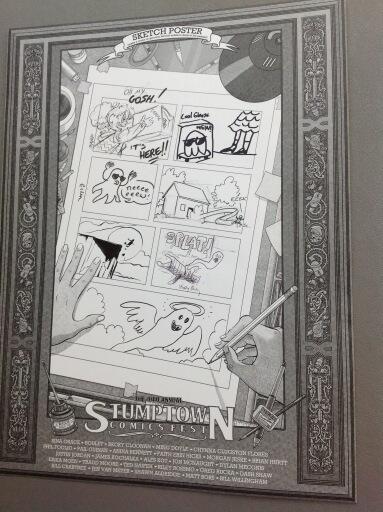 From start to finish, the panels were by Spike Trotman, Carolyn Main, Erika Moen, Steve Lieber, Joelle Jones (I told her I liked how the shadow on the cliff looked like dripped blood), Kory Bing, and Dylan Meconis.

Now I'm home, resting a bit and preparing to rest even more.
Collapse