I've written about this before for this blog, but I felt like sharing again...

RFK Stadium is far, far past its useful life as a sports venue, as D.C. United's learning on a regular basis, but as a former D.C.-area resident who had the good fortune to decide "OK I'll follow the local NFL team" the last season that the Redskins won the Super Bowl, I have a better memory of the place. It's for a sad reason, but it's still a good memory.

During the 1991-92 NFL season, D.C.-area sports broadcaster Glenn Brenner was ill. He was in physical therapy after he'd collapsed while running the Marine Corps Marathon. (Whenever he'd run it in the past, as a joke he'd later play footage of him coming in well among the later runners, in slo-mo and to the theme to CHARIOTS OF FIRE.) December 1991, all sorts of people from all walks of life were taping "We miss you, Glenn!" videos that his channel would play; lots of people, including me, genuinely liked the guy and wanted him to get better. And for a time it looked like he was. He somewhat sardonically gave this message through the Washington Post's TV columnist (paraphrased from 21-year-old memories): "I feel lousy, but that's actually an improvement." Then...he felt worse.

When his condition deteriorated in January 1992, doctors found out the real reason for his problems: Glenn Brenner had an inoperable brain tumor. The hospital and the news announced this on a Friday. Early the next week, Glenn Brenner died. His was the sort of death that had people on local TV crying...even, if I remember correctly, the sports anchor at a rival TV station. (I do remember his Channel 9 colleague Ken Mease crying on air, and their mutual friend, anchor Gordon Peterson, comforting him.)

In between the announcement and Glenn Brenner's death was an NFL playoff game in RFK Stadium. And hanging in the stadium was the fan-made banner "Win One For The Brenner."

Thank you, Glenn Brenner, for being the sort of good and talented person who inspired the sort of love you did.

This day is one of those times I feel Twitter's immediacy and power: lots of us over there are remembering Lou Reed, who we just learned has died at age 71. Lots of stories and tears, and sometimes even well-meaning jokes. (My online friend Terry Chapman said "Great, now we'll never know whether Metal Machine Music was serious or not." I laughed out loud.)

Then came the dick move. Of course someone posted a "Lou Reed's death is a hoax" article. The problem: that someone's on a satire site. Or a wannabe satire site, which states "The website [REDACTED, 'cause I don't want to link to them] is the medium of our satire to expose with humour, exaggeration and ridicule the contemporary mass production and mass consumption that we observe." Which makes me want to quote Annette Funicello when she said "And your point is?"

Satire (and bad satire, at that) within minutes of people mourning. Sometimes I hate the Internet. (Apparently the same site pulled a similar stunt when James Gandolfini, someone else truly well-liked, died.) Also reminds me of how brilliant The Onion frequently is, where it finds the way to do satire that makes a genuine serious point while still making us laugh. Remember, The Onion's first post-9/11 issue had a story with photos of Brittany Spears and the sharks that had attacked a lot of people that summer with the headline "A Shattered Nation Yearns to Care About Stupid Bullshit Again." That still makes me laugh. Staves off the weeping when I remember that plenty of people think Onion articles are real.

I've long admired the ability to be funny and make a serious, maybe even tragic point at the same time. Daniel Handler's novels, both under his real name and as Lemony Snicket with A Series of Unfortunate Events, find the humor in darkness and sadness while well-acknowledging that darkness and sadness. (His adult novels have included murder, incest, and the leveling of modern-day San Francisco, all things we hope and wish don't or didn't happen.) It's also very easy to do that half-assed and, instead of make people laugh, confuse them or piss them off. What the (still-unlinked) website did was half-assed and, I think, pointless. The Daily Currant (which focuses on politics) and ChristWire (a fake "we condem Godless current pop culture!" site), which I've run into online on occasion, also are generally half-assed. They miss something. It doesn't work. Maybe it's written too short-story-like, which I know as a former journalist you generally don't do; "inverted pyramid" is an incredibly needed and useful news-writing rule. Maybe details don't ring true. Maybe it's just not funny...and anyone who complains then gets labeled the humorless one. Bullshit. Just because I almost fell out of my chair laughing at Raising Arizona while the late Roger Ebert was all "Why do people think this film is funny?," someone's going to think that Roger Ebert had less of a sense of humor than me?

And with that I've vented. So someone's humor failed. Someone was wrong on the Internet. It happens. Meanwhile, I can read people's thoughts on why they liked Lou Reed and his work, offer condolences to his family and friends, and listen to the few Lou Reed songs I have immediately available in my apartment. Turned out to be a live performance of "Sweet Jane" on the CD Live on Letterman, and his vocals for the Gorillaz track "Some Kind of Nature." I work with what I have.


Update: The site has since replaced the article with a short, to-the-point, true, and not confusing note that Lou Reed had passed away. No, I didn't complain directly to the site, but I appreciate that the site took down the piece.

Have, less, stuff. It's a current theme; whenever I move, I'd like to move less, please. It means I've gone through things I haven't looked at in years or decades. And, in some cases, rediscovering stuff and being surprised by some of it.

Like the label I'd saved from a bottle of Crystal Pepsi, the product Homer Simpson referred to when he said "It was the magical summer of 1992. The clear cola craze gave us all a reason to live." 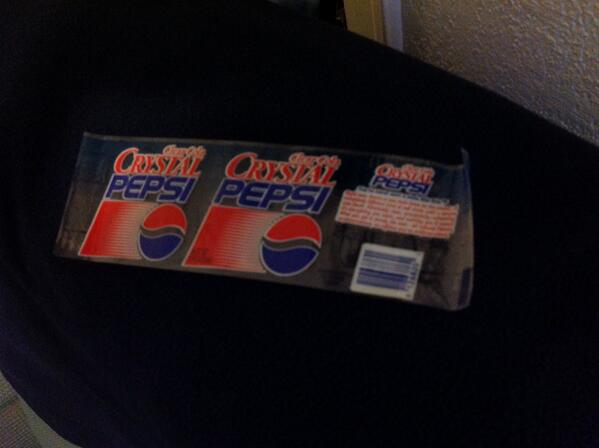 You've never seen a taste like this.TM
Right now, there's a new taste loose on the planet...A
completely different kind of soft drink with a unique
cola flavor. Absolutely clear, wonderfully refreshing,
it's everything you want...and nothing you'd expect.
What you get is purely the best - all natural flavors,
no preservatives, no caffeine and no artificial colors.
The ingredients, by the way, were "carbonated water, high fructose corn syrup and/or sugar, phosphoric acid, natural flavors and citric acid (for tartness)."

I also found playbills from my spring 1992 trip to New York City, for a high school journalism seminar and sight-seeing. One night some of us students did dinner theater at Forever Plaid* -- one of my classmates was the person an actor asked at the beginning what year it was -- and another night we did a Broadway show. It was the musical adaptation of The Secret Garden at, let's see, the St. James Theatre. We were in a balcony. I remember I had trouble following the play -- I've yet to read the novel -- though I did like the music, mainly the instrumental side by Lucy Simon (Carly Simon's sister).

Prepare to smile, the theater geeks I know: the one name in the cast I recognize is John Cameron Mitchell, some five or six years before he created Hedwig and the Angry Inch. He played the brother, Dickon, and got to sing featured parts on at least two songs. So Past-Me has seen him. (Since then, I've only seen him in a clip explaining the creation of his film Shortbus, but I know he's earned fans for lots of good reasons.)

Speaking of New York, I don't even remember when or where I got this, but I found a signed filming guide for the Tuesday, Oct. 27th, 1992 edition of Late Night with David Letterman. (Signed by Letterman. I just realized saying it was signed meant it could've just been signed by Biff Henderson or someone random.) It's sort of a script -- scripted bits are in it, like Paul Shaffer doing one-sentence (and sometime one-word) movie reviews -- but "filming guide" seems a more honest description. That night's scheduled guests were Kathie Lee Gifford (a sit-down talk and her singing "Don't Get Around Much Anymore"), comedian Bill Hicks (not the performance that got pulled from the show and went unaired until a few years ago), and author Mark Leyner. Here's the opening:

From New York, home of the world champion Toronto Blue Jays, it's Late Night with David Letterman.
Tonight: Kathie Lee Gifford, comedian Bill Hicks and Mark Leyner. Plus: Paul Shaffer and the World's Most
Dangerous Band. And now, a man who wants to sell you an Oldsmobile...David Letterman!
Completely coincidentally and therefore pointless, it was show #1701, which this longtime Star Trek fan smiles about. More significantly, the episode was recorded and aired less than a year before Letterman took the show from NBC to CBS.

What else will I find? MAYBE I'LL BLOG ABOUT IT.


* The zombie parody would be Forever Pallid.
Collapse