On this day of the 50th anniversary of Doctor Who, a show about going anywhere in space and time and then doing what's needed to improve that point in space and time, a show about (as fan Craig Ferguson put it) “The Triumph Of Intellect And Romance Over Brute Force And Cynicism,” a show that's shaped Britishers for decades and some Americans almost as long, I offer this one thought:


You can picture it, can't you.

Gift cards are love. I had some Powell's Books gift card money, and thanks to cashing in a credit union benefit I had a Visa with $75 on it, so about a week ago I used the Internet to get books closer to me. That is, I ordered a bunch of books, justifying it by knowing that I'll give half of them to my friend Alicia, since I think she'd like them. I learned today that the books were ready and waiting for me, and it was a good day for walking, so I walked...and walked...and walked (as you know I do), peeked along the way inside the remodeled Bagdad Theater across from the Hawthorne Powell's, and bought -- well, let's show you! 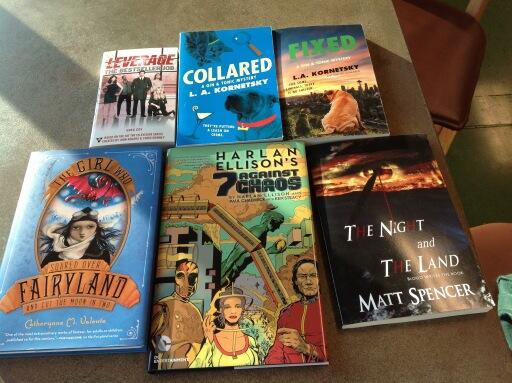 suricattus), writing as L.A. Kornetsky, about two amateur investigators in Seattle and the two pets who are kind of a Greek chorus wondering what the humans are up to; the third The Girl Who... novel by Cathrynne M. Valente

catvalente, this one titled The Girl Who Soared Over Fairyland and Cut the Moon in Two; 7 Against Chaos, where Harlan Ellison got to write a comic again, this time finally taking a long-imagined story about a non-human race stopping at nothing to change history so that humanity would never evolve in the first place (Ellison once proposed the basic idea as a plot for the first Star Trek film); and The Night and the Land, fantasy-horror by someone I know, thanks to the Internet.

happyspector) about some almost-but-not-quite human people living, fighting, and (in one case) loving and fucking in Brattleboro, Vermont. It's a novel and series where all hell breaks loose, more than once, and even at a national level. It'll build to actual factional war in the upcoming Book Two, including a chase scene I've read in draft form that might be the best stretch of writing Matt had done by then. The third book also includes a line FROM MY OWN JOURNAL that I gave Matt permission to quote. This really makes me smile.

The wheels of publishing can move slowly: Matt finished the first draft of this book in 2005. That year I also volunteered to offer editing/proofing advice; he emailed me the manuscript, I printed it, and I marked it up with grammar/spelling corrections plus suggestions on what to cut and what to expand. (And I remember a serendipitous moment of reading a dream sequence involving champagne when the Oasis song "Champagne Supernova" came on the radio.) I considered it practice for more word work, and it was fun. And now something I helped in a small way to get finished is out in the world... and I bought it! And I could. Best of luck from here, Matt. And the other authors whose work I got.


Heh. That (inspired by this) still isn't old.
Collapse