Latest blood donation was this afternoon. Last blood donation: last May. I got distracted, and temporarily fell out of the habit; all my fault. A phone message his week from the Red Cross was the goad, though, because it's a good habit. Usually even my veins agree with that.

And by lucky timing, the blood drive today at my regular donation site was the latest "Star Wars / Star Trek" drive. Members of the 501st Legion were dressed up elaborately and often Imperial-ly, talking to kids, some of whom just gaped; they're a striking sight, in their armor and with their weapons that only look functional. People were in Star Trek shirts and uniforms, too. No Klingons, though, nothing that elaborate. (Anyone ever cosplay as a Horta? I hope so.) I voted to count my blood as being donated on behalf of the Klingon Empire, because as I've said before, blood donation is honorable. (Here, have more photos from that.)

And while there, I got to see a Hoth Snowtrooper scritch a kitten. Because not even Imperials are immune to cute. Maybe the scritch happened because kittens aren't as well-armed as Ewoks. I didn't get a picture because I can get self-conscious when taking pictures of other people with my iPad, because it's so wide and obvious. No problem taking a picture of my donation swag, though: 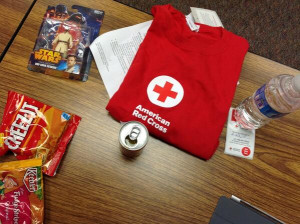 Snacks, water, juice, a donation shirt (finally a red one), and a toy! I got an Obi-Wan Kenobi, though I was tempted to get a Mace Windu. Yes I can have toys.

I also can have other good stuff today: a pre-donation Big-Ass Sandwich, more reading (Tom Clancy's 1986 novel Red Storm Rising; I'm kind of glad I didn't read about land war in 1980s Europe when I was a nervous 1980s kid who'd've worried that that could've happened), and post-donation visits to Bridge City Comics, Laughing Planet Café (juice!), and The Belmont Goats.
Collapse