Once again, blogging al fresco. Portland is having a morning. A cool, cloud-blanketed one, for now, and
I'm sitting on back steps into the backyard. It looks like this: 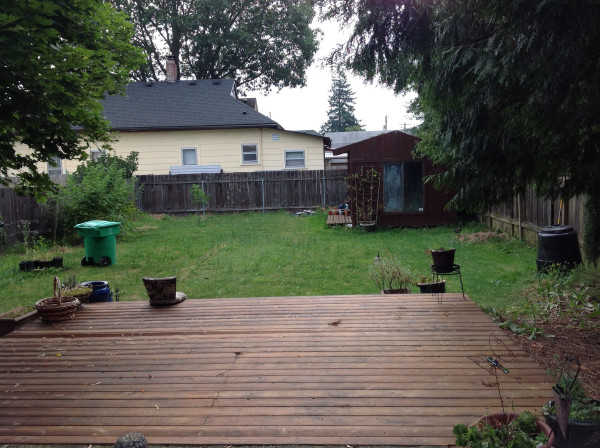 The sun's somewhere behind that big tree to center left. The sun will be more obvious later. As the sun does.

The two cats who live in this house are somewhere out here: maybe to the side, maybe in another yard. Both cats are well past 10 and seasoned outside cats. I do need to be on the lookout for Kitch, a neighbor's cat. "Kitch" is short for "Kitchen Invader." Guess why.

Me, I'm in my summer sleep/morning/pre-shower clothes: sweat-shorts, slippers, and a crinkle-logo'ed "Rock Band" T-shirt. it's the shirt I got as swag at my first Cort & Fatboy Midnight Movie at the Bagdad, October 2007, which a van that opened on the side to let you play "Rock Band" -- pre-release -- visited. I sang on "Dani, California" by the Red Hot Chili Peppers. I'm not singing now. It might wake up people who need rest.

Ah, a breeze. The air is being all "Hey, let's go over herrrrrrrrrrrreeeeeeee..." As it does. Which feels good.

Being outside feels good. I'm trying to do more of that. This yard is a good place to do it.