This is one of my favorite photos I have taken. 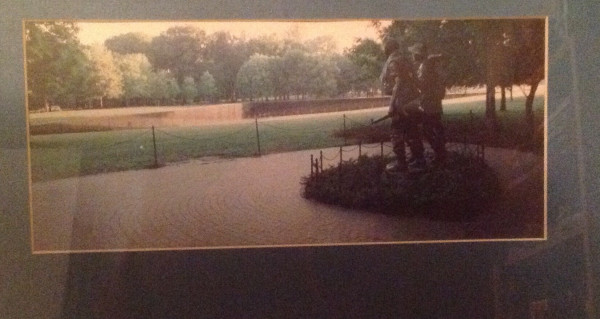 Maya Lin's Vietnam Veterans Memorial, and Frederick Hart's "Three Soldiers," on a summer morning in 1993. I was back in Northern Virginia after my first year of college. I drove into Washington, D.C. pre-dawn, early enough to see dawn in the monumental core. I lucked into this moment: no one at this memorial, one of the most visited in the District. The wall is, of course, hard to get into a single shot: I got as much of it into the frame as I could.

(Apologies for the reflections and other artifacts that are not of that moment, but are instead of a moment on Memorial Day 2015 in my bedroom; this is probably the best I can do to show you this shot without a scanner.)

Another way to remember those lost: the original performance, conducted by the composer, of Bernard Herrmann's 1943 concert piece For the Fallen. I hope you may take nine minutes to experience this.

Adventures in lifting! The power of beer! Interestingly-colored bruises! I've been getting much of the fun of moving. Not me this time: two friends of mine who've gotten married since I've known them, Ryan and Kristen, bought a home a couple of weeks ago. I know how much it can help, having more people help move -- many hands make light work, unless all those hands are slapping -- so last Wednesday I went with Ryan to pick up a washer, a dryer, and a futon* he'd bought on Craigslist and then last Saturday I helped move boxes. Boxes and boxes and boxes. Things that need boxes seem to sprout when you're packing for a move, don't they?

We lucked out with weather on Saturday: overcast and cool-to-warm, with no rain or even drizzle. No more than sweatshirt weather, and sometimes T-shirt weather. We had a decent turnout at both ends of the move, both the Lair Hill apartment overlooking South Waterfront that they've lived in for the past couple of years (I helped them move into that one, too) and the one-story house in St. Johns that is theirs now.

Nice that one place is not so far from the other that the move must be done in ONE trip, as opposed to moving, say, 100 or 200 miles like when I moved from Hermiston to the Portland area 15 years ago. Meaning we wound up making a few trips, because we needed to and because we could. Other friends and family of Ryan and Kristen loaned their cars -- I'd bussed, since parking in Lair Hill is tight -- which were filled, depending, with clothes or art. The homeowners are very happy to now have much more wall space to hang much more of their art they've gotten over the years.

Details: They'd decided not to bring their ottoman to the house, and put it on a street corner ("It's on the Street Craigslist!" I said); by the time we were back from the first trip to the house, the ottoman was gone. Ryan was happy that the artwork on the U-Haul was dedicated to the Hubble Space Telescope and the Goddard Space Flight Center, which are both neat. We packed around items that didn't need to leave the apartment yet, like a decorative sword (you want to transport that carefully!). Their two cats did an impressive job of finding places to hide as the apartment got emptier and emptier, to the point that it took real effort to find them and put them in their carriers. I made sure to talk to and pet the cat Ryan and I took in the U-Haul: "we're not forgetting about you, and you're going to have all sorts of new places to explore." Once to the home, much of the stuff could simply be stacked in a couple of rooms that aren't the master bedroom; that's theirs to sort, on as long a time table as they need. There was beer, as there should be. (One Pabst was all I had/needed.)

Ryan, Kristen, and I were the last ones standing after two trips to the house; their other helpers had needed to leave already. They thanked me for being helpful for that long by treating me to dinner at a refurbished bar a few blocks from their house. Really nice of them. So was their driving me home, which is kind of a haul from St. Johns. After that, I slept well. Another benefit of work like this.


* No, they're not all combined. No one would want to move that. Or use that.
Collapse