Huh. I in fact felt better about people today while I was at an airport.

Because it's easy to get to and because I genuinely like going to it, I went up to PDX and hung out for a couple of hours tonight. Went online, read, played Angry Birds, and listened to people around me. And later went to the top of the parking garage and watched the sunset: 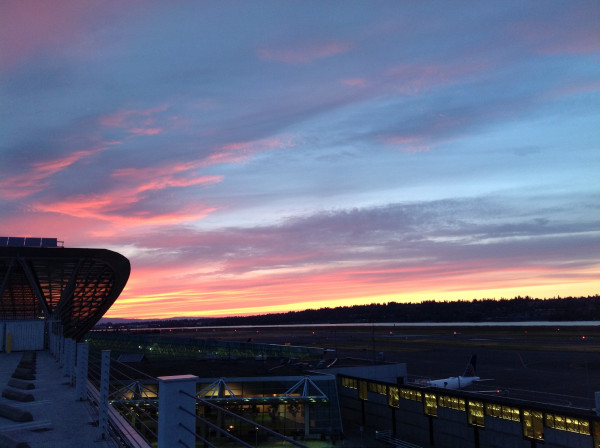 Getting home was no big thing: one MAX train to another MAX train to a bus to the last several blocks' walking. It was on the bus that things went sour. One of two people who boarded one stop after I'd boarded was loud enough that the person he'd boarded with and was talking to shushed him. At least he did turn down the volume, but he made me wonder how much he was paying attention when he prepared to de-board. He pulled the cord. Someone else already had pulled it, so the "Stop Requested" sign was lit up, but all he notices is no "ding" noise (since it had ALREADY HAPPENED). His solution? Pull the cord so hard that he broke it off the side of the bus.

I'm not impressed, bub, especially considering the sign that would have told you that you didn't need to pull the cord was mere feet in front of you. And I extrapolate out from that: what else does that dude not notice? How much not-directly-affecting-him does he pay attention to?

I got into a sour mood because of that. OK, another good example of who Not To Be.

Things continue to be unexciting.

Thank you for reading even when things are not exciting. *hugs y'all*
Collapse