Context changes. Sometimes it goes away. I remember watching this...

...and wondering what people were really laughing at when they saw the title "THRUST," because that laugh seems too big to me. I wasn't even alive when that first aired in 1972, and I certainly wasn't a BBC TV viewer (unless there's a past life I don't know about...). My best guess, and heck, knowing my friends I probably know someone who knows for sure, is that it's a specific reference to a specific...something. Sorry, that's a very unspecific word.

I also got that sense of missing something recently when I read the 1974 science fiction novel Venus on the Half-Shell, by "Kilgore Trout." OK, this needs context: Kilgore Trout was invented by SF author Kurt Vonnegut, Jr. as a fictionalized, less successful (but still prolific) version of fellow SF author Ted Sturgeon; Trout showed up in various Vonnegut novels, and then was used as a pseudonym of yet another SF author, Philip José Farmer, who apparently had fun writing as him. Venus on the Half-Shell is definitely light; it's "picaresque," which (when not written as brilliantly as Cervantes's Don Quijote) can be as simple as "a character goes there, then goes there, then..." And so on. Our hero protagonist, in a story that some argue inspired Douglas Adams*, survives the flooding of Earth (an alien race decided to clean it. Clean it of life), his only Earthly co-survivors a dog and an owl, and he both becomes immortal and ends up traveling to other planets, having adventures and sex. 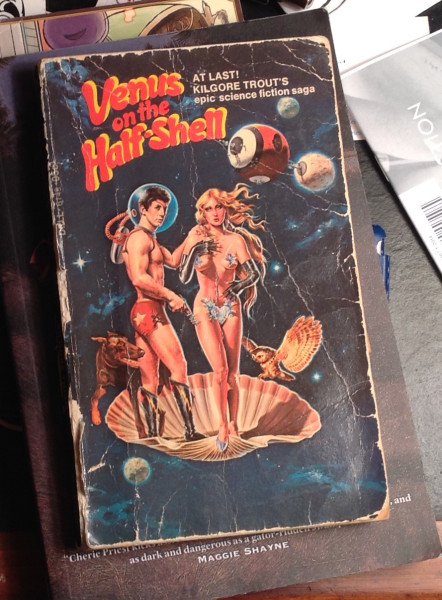 (The back cover says, as part of the joke, "Available for the first time without lurid covers!")

One planet's inhabitants carry not just the DNA of their ancestors but also their personalities, which take over the current person's body for a day here and there; one planet's inhabitants are so sex-starved that they are psychically affecting their sun so that it erupts with flares more; one planet has sexist living zeppelins (really). There's a fair amount of sex and sex-related thoughts (though not much discussion of sexuality; it's presumed heterosexual-ish) in this 204-page book. A lot of it is funny, but I kept sensing there were layers of additional jokes I'd only see if I were a well-read SF fan in 1974. (I didn't even notice that many character names were rude anagrams.) And how many 1% jokes were there? A 1% joke is something that may read as matter-of-fact, perhaps funny to most people but perhaps not even glancingly so, but would make a select few fall out of their chairs laughing. And my fellow geeks are biiiiiiiiiiig on 1% jokes. We like to be In On The Joke.

Ah, the pain and anguish of a geek not In On The Joke. It's something I can fall into, and something I try NOT to fall into. If I don't get a joke or only partly get a joke, wanting it explained just kills the joke. Jokes are kind of like seeds, some watered and blossoming, some not and dormant. Venus on the Half-Shell now has plenty of those dormant ones.

I can understand wanting to study earlier work and finding unexpected funny nuggets -- I think it's fascinating, for example, that scholars have tried to recreate what English in Shakespeare's time sounded like, and that's unearthed more rhymes, puns and jokes that the Groundlings might've roared at -- but that's literary archeology, not necessarily something to make an older work more enjoyable. Give it more context, yes, but jokes, like languages, evolve. What I find screamingly funny probably won't collapse a 22nd-century person, but that person will find something else funny. WE KEEP BEING FUNNY, one way or another.


* An aside: I'm honestly not yet convinced that Kilgore Trout directly influenced Douglas Adams. The basic premise of both this book and The Hitchhiker's Guide to the Galaxy are strikingly similar, but I butt up against one particular issue: Adams didn't particularly like most SF. He once said he would manage to read maybe the first 30 pages of any SF novel before he'd stop, because he generally thought the writing was bad. (He once said of Isaac Asimov, "I wouldn't hire him to write junk mail!") Vonnegut was an exception, though Adams said the writer who influenced Hitchhiker's more was P. G. Wodehouse, who wasn't science fictional at all. I still think indirect influence is more likely in this case.

I didn't think I'd be writing about Douglas Adams and P.G. Wodehouse when I started this entry.
Collapse