There would not be less mess with fewer sewers.

The latest road trip — yes! I survived driving among other drivers! — took me farther west than I've been in a while, up Sunset Highway then a side road and Hwy. 47 until I reached Forest Grove. No, I didn't see Forest Grove-area resident Danny Glover, but I did see 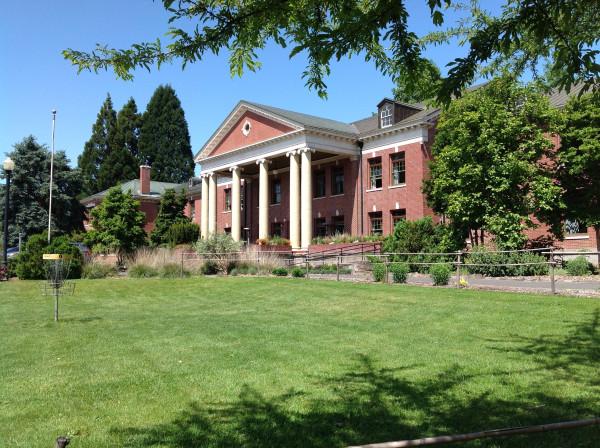 That's McMenamin's Grand Lodge, which I hadn't been to until today. Former Masonic Lodge and a former home for Masons and related family members who needed lying assistance, it became a hotel in 2000 for anyone who could pay. (McMenamin's had done the same a few years previously with Kennedy School, my dad's elementary school.) I satisfied my fondness for walking around in older, funky buildings, and also enjoyed the grounds. I wondered what it had been like earlier in its history when Hwy. 8 running past the lodge would've been quieter.

Before getting over to Grand Lodge, I was sorely tempted to continue west for an hour or so to visit the Coast, but that will wait for another time and a dedicated trip. The Oregon Coast is worth that.
Collapse