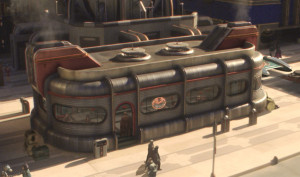 (from Episode II: Attack of the Clones)
I'd been wanting diner time. Got some this morning. I'm not particularly drawn to the diner nearest to me, the Maple Leaf, which I've been to once and which honestly rubs me the wrong way; the next-nearest is the SE 82nd location of the longtime Portland chain Tik Tok. Portland's had at least one Tik Tok since the late 1930s, the original a drive-in at SE Sandy and Burnside.

Steak and eggs. Choice of hash browns or home fries: I chose the latter. Coffee, especially needed this morning (I had trouble sleeping last night). Orange juice, an extra splurge, since I hadn't had much lately. Slightly dark (though decently maintained) decor, but with enough light from the ceilings and from 82nd past the windows. A quietly enthusiastic waitress who was having fun, sometimes singing to alt-rock songs on the radio, and once calling to the cooks "Keep it down in there, I'm trying to sleep!" Sports on TVs: highlights plus tennis on some screens, NFL Network rebroadcasts of pre-season games on others (including a wall-sized screen in the lounge; I just walked back there, didn't sit there). And me, in a booth — there were plenty of open booths at the time — reading Life Itself, by diner appreciator Roger Ebert. Conversations were overheard. Coffee was refilled. Laughs were had. I giggled to myself maybe a little more goofily due to still being a little out of it from last night. Outside, a fall-preview day: overcast, cool, and starting to mist, not quite drizzle. And inside, warmth that kept me warm as I headed out in that mist.

I wanted to record that. I want to remember that.
Collapse