I still both laugh and sympathetically cringe at the time in November 2001 — a time when basically the whole United States was in A Mood, for a huge reason — that Indianapolis Colts coach Jim Mora minced no words about his team's loss:

Well, I’ll start off by saying this: do not blame that game on the defense, OK? I don’t care who you play — whether it’s a high school team, a junior college team, a college team — much less an NFL team. When you turn the ball over five times — four interceptions, one for a touchdown, three others in field position to set up touchdowns — you ain’t going to beat anybody I just talked about. Anybody. All right? And that was a disgraceful performance in my opinion. We threw that game. We gave it away by doing that. We gave them the friggin’ game. In my opinion, that sucked. Ah. You know? You can’t turn the ball over five times like that. Holy crap! I don’t know who the hell we think we are when we do something like that. Unbelievable. Five turnovers. One of them for — We’ve thrown four interceptions for touchdowns this year. That might be an NFL record! And we’ve still got six games left, so there’s no telling how many we’ll have. That’s pitiful! I mean, it’s absolutely pitiful to perform like that. Pitiful!

And added, when asked if the 4-6 Colts could make the playoffs:

What’s that? Ah — Playoffs? Don’t talk about — playoffs? You kidding me? Playoffs? I just hope we can win a game! Another game.

Anyway, football's back! I can keep that in perspective. 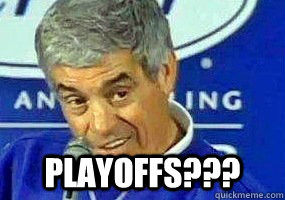