That could've been worse.

As I've done before, I spent this afternoon in the lobby of the OHSU-Portland State University-Oregon State University shared complex, the Collaborative Life Sciences Building, on South Waterfront next to the new transit bridge. It's a reasonably comfortable place, there's a deli and a Starbucks in the building if I (or students) need sustenance, and there's wifi. I read, and used my tablet to follow the UO-Nebraska football game (a squeaker loss that the Ducks could've tied they hadn't had three failed 2-point conversions; seriously, I like that more teams try for conversions, but four in one game is a little much (especially with a 75% failure rate)) and the Portland Timbers-Philadelphia Union soccer game (yes! 2-1 Timbers! Phew). I wanted to next go to Central Library to return a book I'd gotten there, so I left, got on a streetcar, and was almost to the library when I realize I couldn't find my cell phone.

Checking my pockets and carrying bag: yep, not there. Checking the streetcars floor: not there. Thinking about my path since leaving the Collaborative Life Sciences Building: oh, yeah, probably still in the chair I'd been in.

Quicker library errand, it was. The southbound streetcar stop is directly behind the central library, so I went there. Didn't have to wait long, thank goodness, and I got back to South Waterfront, marched into the building, beelined to that chair: yes! Still there. I didn't cheer because a student was now on s couch next to it, resting, and didn't need me woo-hoo-ing. I can behave. 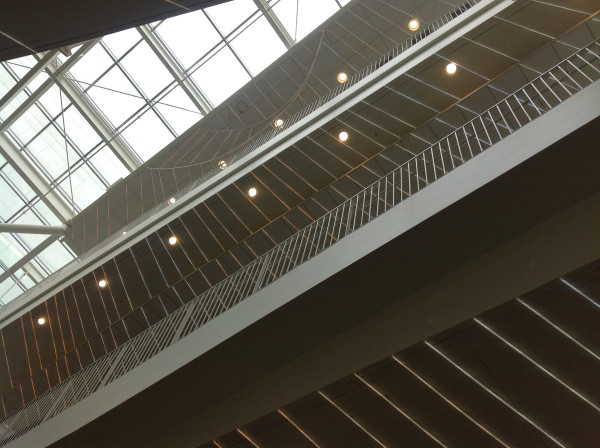 And me, relieved (I shot this later): 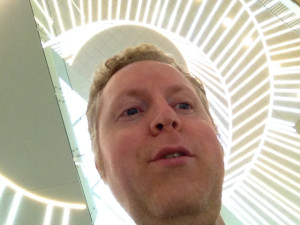 Not lost! I take victories where I can.
Collapse