I figured out a name for a recurring dream location of mine: The Complicated House.

The house is large, tall (multiple stories, seems like), and usually almost but not quite comfortable. Plush, but in a way that slightly sets me on edge. I'm almost always the only person in it, wandering around and exploring — which, hey, I tend to do just in general, in waking life. That wandering pays off in, often, finding what feels like a secret passage with a ladder or a steep stair leading to an attic bedroom: a bedroom loaded, loaded, loaded with books. (It's never loaded, loaded, loaded with redheads, hrmph...)

There are other rooms, too: I've even found the bathrooms. Plus multiple stairways, which I've always found neat, whenever I've been in a house big enough to have more than one staircase from the first floor to the second. I'm almost always in this house at night, and I know the views from it are likely spectacular — the version of The Complicated House I dreamed of last night was clearly on a rise above a large, Seattle-like city — but I never get a full, sweeping view from it. I know my dreams can give me full, sweeping views, but here my dreams tend not to. It's as if I'm overly focused on The House...as if I'm trying to solve it.

Last night's Complicated House dream had me overly focused on piles of (significant, I guess) cassette tapes and which of two bedrooms — the seemingly secret attic bedroom with books, and a larger bedroom a floor below and on the other side of the house, where the tape piles were — was warmer. And, apparently significantly, which SHOULD be warmer. Yeah, not much drama.

I'm not sure if The Complicated House is inspired by a particular house I've been in. Some dream-houses I've seen, are: I've often dreamed of what had been my mom's family house from the 1960s to the 1990s. It's very specifically their house in NE Portland's Concordia neighborhood; maybe notably, that was a house where I stayed as a newborn. And I wonder what was on those cassettes. 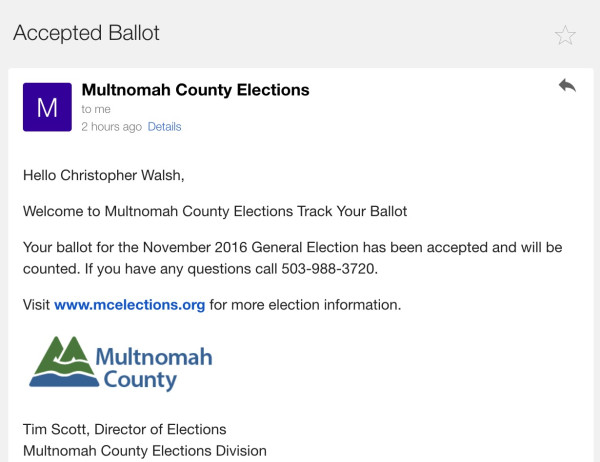 No, I don't want to say how I voted. I tend not to. But it helps me to know, after dropping off my ballot Friday, that it's definitely in the system.
Collapse