Those are two of Earth's five Lagrangian points, where Earth's gravity and the Sun's gravity balance out so that satellites placed there will stay there. L1 and L2 are each about one million miles from Earth, well beyond the Moon's orbit; L1 is between the Earth and the Sun, and L2 is behind the Earth relative to the Sun. 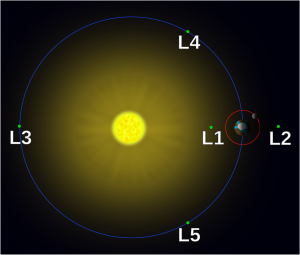 For much of my life, this only happened in science fiction; I knew it could happen thanks to reading Arthur C. Clarke from around age 10 on as he described having space stations and observatories out there. What I didn't know until just now was, we got to L1 for a few years. From 1978 to 1982, the International Sun-Earth Explorer 3 orbited at that point before its operators sent it into a new orbit to study comets. L1 was reached again in 1996 by the Solar and Heliospheric Observatory, in 1997 by the Advanced Composition Explorer, and in the past two years by the Deep Space Climate Observatory (DSCOVR) and the LISA Pathfinder. We also reached L2 in 2001; I'm sure Arthur C. Clarke smiled about that.*

No humans have reached any Lagrangian points yet, but we don't yet need to: sensors and cameras are already there. Like DSCOVR, working at L1 with a constant view of the full-lit Earth. One of DSCOVR's tools is a camera, shooting that view every two hours. An enterprising British guy set up a Twitter feed of those shots; and NASA and NOAA (the National Oceanic and Atmospheric Administration) have been nice enough to create time-lapses of those images.

I watch those animations sometimes, as well as go through the Twitter feed's archive of shots. I get reminded of the tilt of the Earth relative to the sun, so that what's visible on the surface shifts over the months. Antarctica at the moment is visible no matter what, under 24-hour summer sun; Europe, Russia, and Canada are at the globe's other edge, rearing away as if trying not to touch rays of light. (Not what's really happening, I know. I've had science education.) There is always a bit of sun reflected at the center of the view of the Earth, like the sea or ground is polished. Of course, it's perpetually pretty.

Everything we can confirm is alive is in this shot eventually.

All that science fiction I've read makes me hope there's plenty of life on other worlds; the satellites at L1 aren't looking for that. Earth is their job. Much of that science fiction also imagined people living in space stations at the Lagrangian points, which in certain ways would be convenient, but that isn't likely for a very long time. I'll just imagine them, like 10-year-old me did.


* A Clarke anecdote: something a lot of us argued about in the 1990s was when to celebrate the new millennium. 2000 wasn't the first year of the new millennium; it was the last year of the last one. So we argued whether we should have the big celebration on Jan. 1st 2000, because the impact of that rollover would feel so momentous, or on Jan. 1st 2001, when the millenniums changed officially. Clarke said (paraphrased) "Why not just party for a whole year?"
Collapse