Poetry, to me, seems — seems — to come to me easier when I write it by hand. I've tested that this year by carrying a notebook, repurposed from a work notebook, around with me. (That notebook was also a victim of last month's Greek salad dressing spill, and needed some time airing out in a corner in order to stop smelling like food.) In the notebook, it's easier to strike through words I decide not to use, or run through possible words I might use. On the Notes app I have on my tablet, either I delete the words or I could make a list of discarded/ replaced/ alternate words below the body of what I'm writing, but that would get out-of-context quickly. I can't draw lines from one group of words to another on this tablet to say Actually, THESE words connect to THOSE words! (No, I'm not upgrading to some other device with one of those pen-like devices to write on the screen.) Written-out poetic thoughts seem, to me, more poetic. THEN, I can type them so people can actually read them! My printed words aren't pretty. Or always legible.

I'll test that further. One day last year while bussing to work, I thought of a particular poem title I liked. I made a new Local Note in Notes and started writing the poem, and stalled out after only seven lines (one of which was "To "). I didn't seem to be getting it. Some time after now, I'll write the title into the poem notebook and re-start the poem, as much from scratch as possible. I want to ignore those seven lines I'd tried to write before...until I've finished the poem, or come close to finishing it. Then I want to compare the versions. Then, I'll want to delete the old Local Note, because I want to have fewer notes saved on my tablet. Clutter can be clutter even on a device that makes all its words look neat.

That's one reason I motivated myself to finish this long piece about my relationship over the years to radio. That piece sat unfinished for a year-and-a-half. I'd look at it and wonder if I was being self-indulgent with it. Maybe not, maybe so, but I wanted to finish it. Now it is, and can live on my blog instead of in my Notes. (I'm fond of the piece, and proud of it. And it feels good to be done.)

Some notes will stay. At the moment, I have eight of them, down from 11 recently. One has book recommendations, one has random lines of possible dialogue I've come up with over the years, one has titles I'd like to use sometime plus interestingly misspelled words. It's an idea I got from science fiction author Larry Niven: misspelled words can sometimes become, or inspire, cool science fictional or fantasy names. One note has either an in-progress blog entry (right now, i.e. Saturday at 11:05 a.m., this one) or, as a place holder, "Next Entry"...sometimes just "Next" or even "Next!" Another note contains details from a day at Big-Ass Sandwiches, the second-to-last day it was open. I have personal reasons for keeping that.

Meanwhile, I'll see what other poetic words I can find. And when I finish this notebook, I have another notebook waiting.

Until last night, this was a full bag of Harry & David Moose Munch. 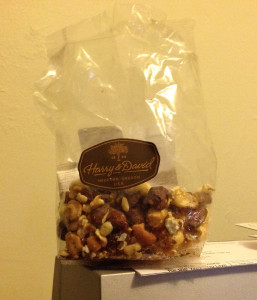 It also was an unopened bag of Harry & David Moose Munch. One gift at Family Christmas 2015 was a box of all sorts of treats (fruit and candy) from the company, and we divvied up the treats from it. I decided Why not? and took that, plus other stuff, figuring that while I usually don't like sweet popcorn I'd eat at least the nuts and chocolate.

I kept not actually eating it.

The bag stayed in a kitchen drawer, and stayed, and stayed, while plenty of other food came and went (into my belly), but last night even though I was worried it'd be stale by now, I wanted something dessert-y, darn it, and this was the most dessert-y thing I had.

I'm liking it more than I'd expected. So my tongue is happy, my digestive tract is happy, and that helps. This is not a major blog entry, but I wasn't trying for it to be. *grins*
Collapse