This one is especially personal. You'll be able to tell.

What's been done?
We've made — so far — what?
MUCH. A lot. Plenty. The past was busy.
We recall a fraction of it, a percentage of a percentage, varied per person
As we/they live and recall more.
3-year-old me: Just starting the job of learning to remember,
In suburban comfort, Southern California version: a Rancho Bernardo cul-de-sac
With trees (one slightly climbable) and a backyard hill (definitely climbable).
13-year-old me: Four moves along from San Diego, now to Northern Virginia,
Watching planes and finding them neat and seeing girls and finding them pretty.
Head-ducked school life, as junior high began:
The frustrations of getting through/surviving school, trying (where possible) to thrive: somewhere, somehow, in some things.
Seeing the world through an evermore science-fictional filter:
Clarke-ian utopias, Serling-esque and MAX HEADROOM-style dystopias, Car Wars
(not playing: instead, reading the descriptions of a gone-to-Hell imagined future)
Not analyzing the SF, but letting it speak to me, flow into me
As I enjoy it.
23-year-old me: Coupled,
College-experienced,
(finally) Oregon-based,
About to lose a coupled-relationship
And then about to lose a best-friendship.
(Summer 1997: a tough summer.)
33-year-old me: Weathering a bad boss
(someone seemingly assembled from bits of every difficult co-worker I'd ever had)
In a needed job (in-hospital), made harder than it had to be
— Too many jobs are harder than they have to be —
But slowly connecting better to Portland
And slowly connecting better online.
A year away from quitting due to that bad boss,
And a year away from flying to friends I'd only known via online words.
My words helped me find others.
Words helped.
43-year-old me...
One month in.
The Magic 8-Ball is unclear.
Life, for several reasons, is unclear.
I wish to make it clearer.
I'm listening to Earlier Me,
To see (I hope) what I've said.
Earlier Me has learned a lot.
Earlier Me has been lower before,
Been higher before,
Gotten through before.
This should not be a revelation, or a surprise,
But I needed the reminder.


© Christopher Walsh, 2016. Unauthorized use and/or duplication of this material without express and written permission from this blog’s author is strictly prohibited. Excerpts and links may be used, provided that full and clear credit is given to Christopher Walsh (chris_walsh) with appropriate and specific direction to the original content.

At times in my art, I've tried to be surreal. Feels a little like cheating.

Attempted surrealism is easy. Real, committed surrealism is hard. Or at least harder. The surreal image should have at least a toe in the real, reasonably recognizable world, to give the viewer (or reader, if it's surrealist prose) some foundation. It can at least seem to make sense, at some level; we just won't necessarily get it. But it's too easy to just make up disconnected bits of whatever and say "It's surreal!"

I've never been particularly good at surreal art; I haven't practiced much of it. I tried with this collage in high school, and it's a mixed bag. The original image is of an F-14 Tomcat coming in for a landing. I added to it: 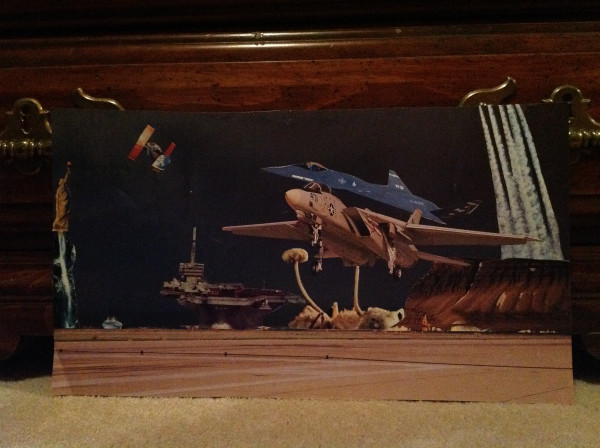 I'm happiest with the subtler additions, like the large cliff on the right side. Most of the rest seems too stuck-on (figuratively as well as literally), though I do like that the mummified ant is a giant, horizon-straddling artifact. It's mountain-sized, unlike any ant ever. (We hope.)

I sort of acknowledged that I was doing images for images' sake when, in a college art class at University of Oregon, I did these storyboards for an animated sequence I never did. I think I didn't plan to animate it, but I wanted to think like an animator, think in terms of pure images. 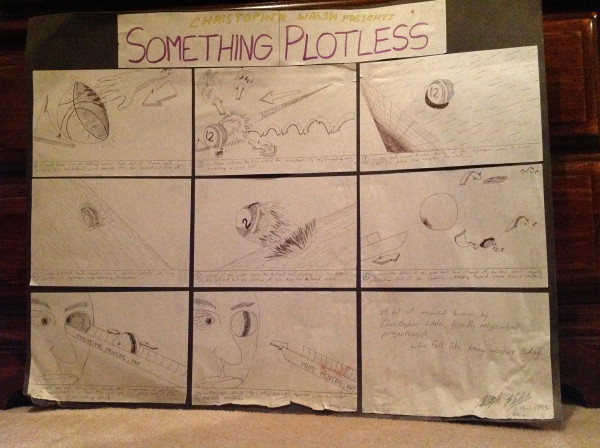 Here are the close-ups. In the last panel I signed myself "friendly neighborhood projectionist" because at the time I ran 16mm films, plus videos, for Prof. Kathleen Karlyn's film analysis class. 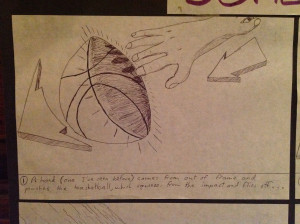 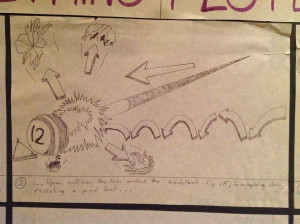 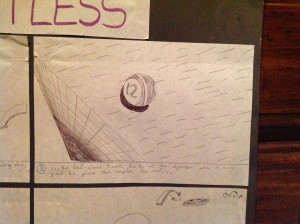 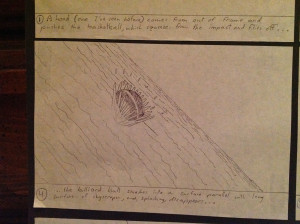 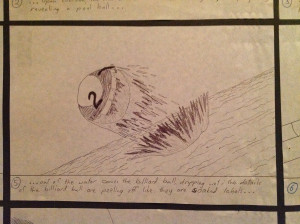 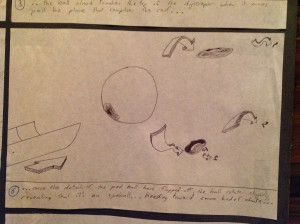 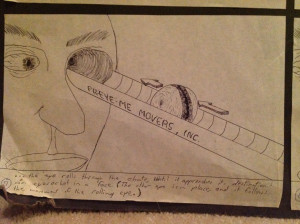 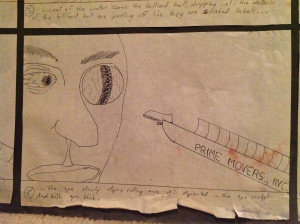 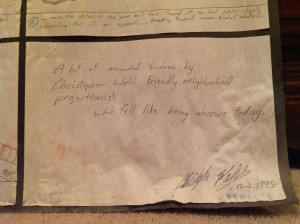