In 2004, I tried to remember a book I'd read as a kid. I had very specific memories of it, including when I read it (circa 1981, in Camarillo, CA) and a big reason I'd read and enjoyed it: The book starred a talking dinosaur. A modern-day dinosaur, too (or at least modern day when the book had been published), having adventures. I wrote down what I could remember about the book and went to the Beverly Cleary Children's Library, in Multnomah County Library's Central Library downtown, and asked a librarian for help.

She found it. She found it even though at least one detail I'd thought I remembered was completely wrong (who the modern-day characters were) so my memories were slightly jumbled. She un-jumbled them and told me I'd read The Shy Stegosaurus of Cricket Creek, by Oregon author Evelyn Sibley Lampman. Came out 1955, had a sequel in 1962 called The Shy Stegosaurus of Indian Springs, and was available to read through the library. So I read it, and its sequel, happily. (Later I learned J. Michael Straczynski, years before he created Babylon 5, had scripted an animated short version of the first book in 1987. Not his usual sort of writing, but he'd found the book fun, too.)

I was sure there'd been a novel about Disney cartoon characters traveling cross-country.

No, not just an animated short ("Mickey's Trailer," 1938, and c'mon, how cool is that camper?!) but an actual novel of Mickey, Minnie, Donald and others hitting the road in a camper. I read it one of the times in the early Eighties when I'd visited family in Portland; I'd found the book at my dad's parents' house. Occasionally as an adult I'd recall it, and even quote from it: a character (Minnie Mouse, I was convinced) stands on the south rim of the Grand Canyon and says "It's not real. Somebody painted it." (I've visited the Grand Canyon; it does seem surreal like that.) But my searching proved futile. No sign of it.

It took me this long to finally, once again, ask a Multnomah County librarian (via email this time) to puzzle out what I'd remembered. And I think someone has.

This despite my having even more details wrong this time: yeah, it's almost certainly not about Disney characters, plus I'd thought it was published in the 1940s and it almost certainly wasn't. But I'd remembered it was illustrated, and it included a stop at the Grand Canyon...

...which are true of the novel Henry Reed's Journey, written by Keith Robertson and illustrated by Robert McCloskey, published in 1963. And it includes a scene where the characters stop at Disneyland. PIECES FALL INTO PLACE, IT WOULD SEEM. Seem.

I hedge my bets because, unlike Lampman's books, the county library doesn't have Henry Reed's Journey in stock. Powell's Books Cedar Hills Crossing does have it on shelves, though, so next time I visit that branch of Powell's, I can check. I don't know when I can get out to Beaverton, but still, like I need a reason to visit a bookstore.

Thank you, librarian at Multnomah County Library, for once again un-jumbling my memory, and for handling all the books and information you know.

Look up info on the Roman Navy, see pictures of its naval vessels, learn more about the overall history, be aware of a pivotal moment of human history that completely changed not just the Mediterranean but the rest of the world, draw it...

...and decide "I won't resist captioning it like this." 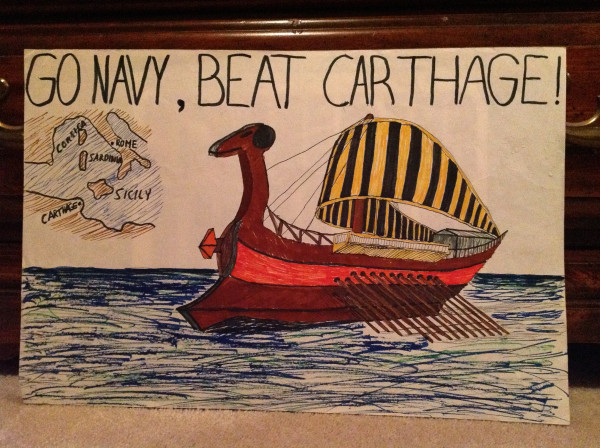 I don't (and didn't) in fact follow Navy college sports, but it amused me to do that.
Collapse