"I guess (and hope) whales don't mind us watching them."

For three weeks in 2008, I worked from home: my studio apartment, over my (still dialup at the time) internet connection, doing research for the medical transcription company I was about to quit. I gave two weeks' notice the Friday of that first week.

There are jobs I'm sure I could've done from that studio. That job wasn't one of them. Took me four days to realize that. (Long story short, a manager at the hospital where I'd worked since 2004 convinced my employers there wasn't enough work at the hospital to warrant me working from there, though I learned later that, guess what, THERE PROBABLY WAS.) The apartment wasn't meant to be an office.

Maybe, maybe, it would've worked to rent an office. There were office buildings nearby, within walking distance, in fact. I doubt the company would have sprung for it, though, and I would not have been able to afford one on my own. I remember Mom suggested at the time, maybe jokingly, that I ask my bosses to rent one, but as I've worked further, often at desks, an office has seemed like a better and better idea.

Maybe that's because I've never really had an office. My hospital job was in a corner, so it kind of felt like a separate office; I often was in the office of the vice president I worked for at the construction company, but obviously that was his space, though I had to know where much of the stuff in that office was; I've worked in plenty of cubicles. And where I've lived, I've never had an office, as in a dedicated space. A desk in a corner of a studio or one-bedroom apartment; that's the closest I've been. My desk is in my current bedroom; it doesn't have room for a seat, so I stand at it, with the keyboard on a copy of The Riverside Shakespeare. Maybe one of those kneeling chairs would fit there. But it's not a separate space.

Would a separate office really be good for me? Or is this a "grass is always greener" thing? Would I use it, getting words written in it? Would I get sick of it? Would I be more productive? Less? I don't know if it'd be worth it. But sometimes I visit Portland's Union Station, opened 1896, to remind myself that offices are out there. I'll pretend the Union Station offices for rent look like this. 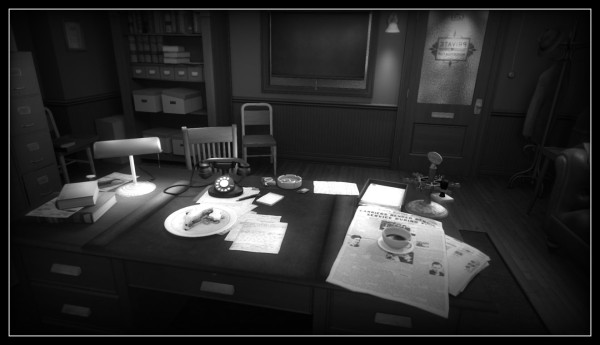