Airports and the future. Two things I became more and more interested in during the Eighties. Living in Vienna, VA and then Oakton, VA, I was near Washington Dulles International Airport, which at the time was finally getting busier: the airport had had a reputation in the Sixties and Seventies of being a "white elephant" without enough flights to justify its size. It's a striking airport, its terminal designed by Eero Saarinen (and carefully extended, using the same design, in 1996) and its runways, far longer than National Airport's, accommodating to the big planes; a lot of those big ones, like 747s, flew directly over our Oakton home on final approach. So did the planes that just sounded big, like the smaller-than-you'd expect Concordes and the Iluyshin IL-62s flown at the time by the Russian airline Aeroflot, with their four tail-mounted jet engines. VERY noisy, even by jet standards. I watched plenty of those planes, and sometimes drove out to Dulles just to watch launches, landings, and the movement of thousands of people.

Now to bring in the future thing. Once, I had a dream: futuristic submersibles descending into a sea, big lights revealing the wreckage in the water of...Washington Dulles International Airport, because in a far future Atlantic water levels had risen hundreds of feet and submerged the terminal (and huge swaths of the East Coast) — unlikely, but striking. The image stayed with me.

It inspired this pencil assignment for high school art. To be able to show more, I dropped the whole "submerged" idea and just went with ruins.

Something I just wrote: "And still maybe the most emotionally moving use of the Harrison Ford Finger of Doom."

(You can guess which it is if you want. This wasn't it.) 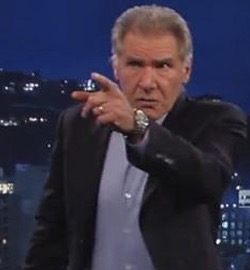