It probably says a lot about me that in summer 1986, I didn't go to a theater to see the film Howard the Duck, but I did buy this: 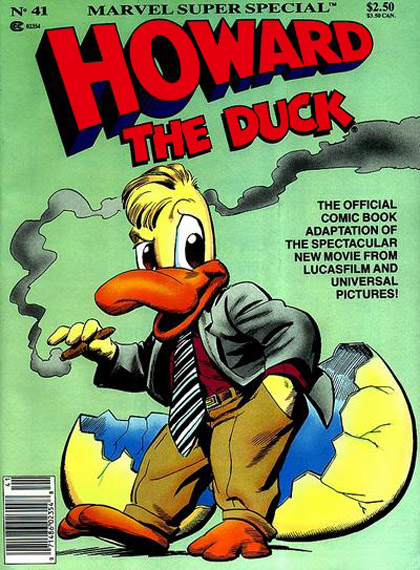 The film is infamous as the sort of flop that gets studio executives fired (Frank Price of Universal was the fired exec; Variety's headline was 'DUCK' COOKS PRICE'S GOOSE); with international receipts, the film just barely squeaked past making more than its $36 million budget. It can be hard to realize (during our current renaissance of really, really good films based on Marvel Comics characters) that for a long time, this film — no matter what you think of its content — was the most lavishly-produced film version of a Marvel comic. (Course, for years Howard's competitors were films like the misguided Dolph Lundgren Punisher and the ultra-low budget Fantastic Four that was made purely so another company could keep the FF film rights.) It was a mad gamble on George Lucas's part, but I weirdly respect him for gambling on it. Even as weird as the film of Howard the Duck turned out.

That wasn't inevitable. Lucas hired the writers of American Graffiti and Indiana Jones and the Temple of Doom (also the uncredited writers who made the original 1977 Star Wars, among other things, funnier); they knew what they were doing. Their first instinct was to make a "Howard the Duck is a P.I. in Hawaii" story that wouldn't acknowledge at all that Howard was a talking, intelligent duck; it would just expect the audience to accept that. But the studio wanted a live-action, origin film. They got that, along with some snazzy ILM special effects and a retroactively creepy performance by the, it turned out, creep Jeffrey Jones.

And as Howard the Duck was a Marvel character in the first place, it made sense for Marvel to release a comic book adaption of the film. By then, my brother T.J. was a comic book collector, and I was learning about comics by osmosis. (Years earlier, he let me read an issue of the short-lived Beyond the Black Hole and I handled the comic badly, crinkling it and making him mad. Sorry, T.J.) By 1986, my first period collecting comics, I was collecting Star Trek; later, I'd get (late) into the offbeat, funny, and low-selling and soon-cancelled 'Mazing Man. We went as a family to a Northern Virginia comic shop; this was around when Marvel's competitor DC was promoting the upcoming launch of the seminal, classic comic Watchmen. I had allowance money, got this, and read it multiple times. I liked it. A year or so later, when the film reached cable, I watched it once on HBO. I finally learned that the Dark Overlord that attacks at the end was drawn completely differently in the comic...

...than what special effects master Phil Tippett, who'd previously animated the AT-ATs in The Empire Strikes Back, had animated for the film: 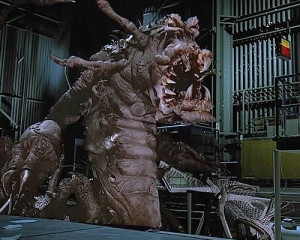 I'm guessing that either comic had to be drawn before the film version of the creature had been designed, Marvel wasn't allowed to use the film version of it, or (variation on the preceding theory) the filmmakers wanted to keep the look of the Dark Overlord completely under wraps until the film came out, the way they hid the film version of Howard himself. Still, a giant evil duck attacking our hero duck makes a kind of sense.

I think I avoided going to the theater to see Howard the Duck out of a sense that it would do fine on its own — I was already a George Lucas cheerleader, and I still am, plus remember that this film really was high-profile and getting hyped — but I think I got the comic not just because I could keep it (which I did, for years; I wonder if I still have it) but I saw by then that it was good to support the publishers and the shops.

As happens with most comic book fans, I fell away from comics for a while; I only got some during high school, but I started paying renewed attention to them in college in the early '90s. T.J., still a collector, turned me onto Comic Buyer's Guide and Peter David's column "But I Digress..." I followed comics more as a concept than as something to read, but eventually I got back into collecting... and started adding to the long box I'd schlepped around the country for years that held (and holds) my 1980s stash. I'm a regular, if small-time, collector now, enjoying some stories. Helps that I'm in as comics-friendly a town as Portland, and that I even know some friends and acquaintances in the business, on both the creation side and the selling side.

Thank you, Eighties-Me, for getting into comic books.
Collapse