A quick catch-up on where I've been and what I've been up to:

As time's gone on, my job hunt has continued. Here's some of what else:

Monday was a stay-close-to-home day. Not much to report.

Tuesday, I let myself have Turkish coffee, a very occasional treat. (I usually have it at Nicholas's, a Mediterranean chain here in Portland I've liked for decades; I hadn't been to a Nicholas's in a while.) I had this Turkish coffee at my first visit to Marino Adriatic Café, on Division near 39th Ave./Cesar E. Chavez Blvd. More walking and reading-while-walking, though when I passed through neighborhoods I hadn't been to before I was more likely to put down the book and look around.

Wednesday, I drove to get my friend Riona and go to the Bunk Sandwiches on NE Alberta, which was giving away free grilled cheese sandwiches for Grilled Cheese Day. It was also a fundraiser; we donated to Dollar For Portland, which helps local people who've had massive sudden medical expenses. After donating, we got our sandwiches (chips, too), sat outside, got lightly but not badly rained on, and visited. It had been a while. Plenty to catch up on.

Thursday and Friday, I again went on long walks throughout SE. Thursday I went to the Belmont Library then up to Mt. Tabor, walking near the reservoirs. Friday was errand-focused: groceries plus more TriMet tickets, which currently make more sense for me than a monthly or weekly pass.

This morning, so far, I've stayed put. OK, now I have other things to do than rest...

Closing out with pictures from the west slope of Mt. Tabor, Thursday at about 5:00: 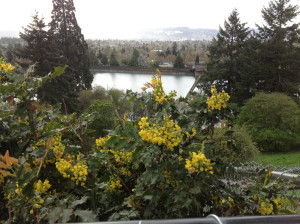 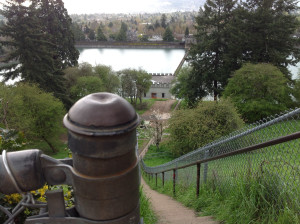 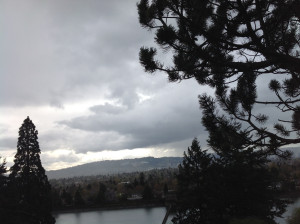 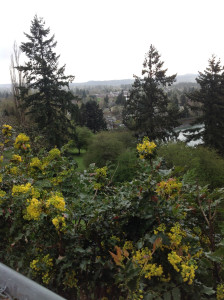