Productive trip. I drove out Saturday morning to my parents' house, 30 miles southwest of Portland. I let myself drive a less-direct route, out Burnside and briefly on Hwy. 26 (after a wrong turn, but oh well) before taking Murray Blvd. to Scholls Ferry to 99W. (Murray Blvd.: one of the few straight — well, mostly straight — north-south routes through Beaverton. Though it goes up and down like a mofo.)

I had books to return to the house — books of Mom and Dad's that I'd borrowed, books of mine I wanted to store — and old photos of mine I wanted to go through. I've been in the mood to look back, as my "Pieces of my past" blog posts attest, and luckily I'd been taking plenty of pictures during the times I wanted to look back at. Not an ideal setup — I was taking pictures of pictures in photo albums, so getting them in focus and without light reflecting off of them was a little challenging — but I got what I wanted.

Also, I took advantage of having a garage, and the tools and accoutrements of a garage like funnels, so that I could add a needed quart of oil to my car's engine.

The trip opened up options. I considered staying overnight at the house, or possibly driving out to the Coast or to some other pretty part of Oregon. I had books for reading if I stayed, and a fueled-up (and oiled-up!) car if I went elsewhere. But it made the most sense to head back to Portland, so I did.

...hey, I could make these journal entries even more boring. *grins*

You don't just have to be young to grow up! I'm 43, and I'm still growing up. Still learning. Still doing that in different places.

Since I left Virginia for college, 25 years ago, I've lived in three different parts of Oregon. Circa 2000 there was a non-zero chance I'd move to Seattle — I visited in the spring, and researched the many newspapers published in and around it for possible jobs — and in some alternate timeline I may have lived near Boston, one of the places in the East I find I am comfortable. But as an adult, so far, I've been an Oregonian.

That included dorm rooms in two different complexes at U of O in Eugene. First a room in Henderson Hall, Bean Complex on the east side of campus, 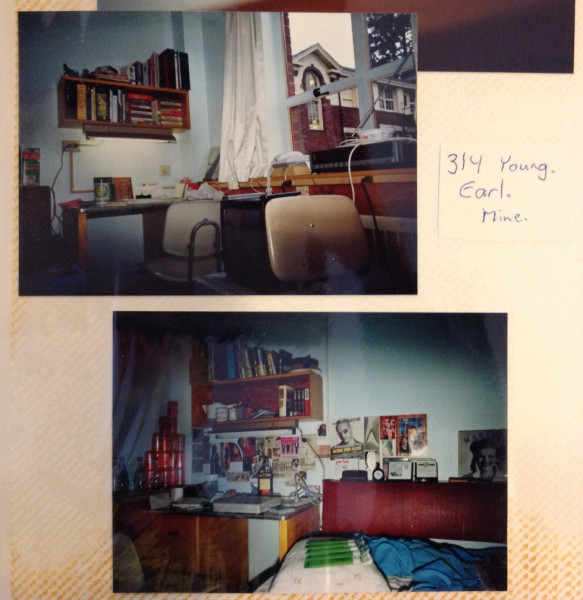 Ah, Bean, the site of (up 'til then) the strongest crush of my life, on a dorm mate named Lori. Also where, one night, I overheard a sad, angry student yelling while he hit something, and learned later that he'd been hitting my bicycle in the rack near Henderson's entrance. (To his credit, well at least some credit, he found me and apologized to me.) And then Young, where (among other neat events) I finally dated. I dated Alicia, who lived on the north side of Earl. We met because a friend of mine was her hall's RA, and I'd sometimes go over to their movie nights. We met the night in January 1996 when they watched Mad Love with Drew Barrymore and The Englishman Who Went Up a Hill But Came Down a Mountain; we hung out a time or two during the next week; and we started dating at the next movie night, which was Clueless and Apollo 13. We started a relationship which lasted a year-and-a-half and, after another year-and-a-half of little contact, a friendship that's lasted much longer.

Starting in 1994, the family home was — and is — in Dundee, in Willamette Valley wine country. Here's how it looked then... 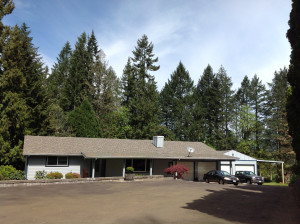 If you know Highway 99W, Mom and Dad live about a mile away from where the highway narrows from four lanes to two. (This is a well-known reference/choke point for many Portlanders.) My parents have thoroughly remodeled the house over the years, making it nicer. Dad's done a lot of the work himself: he became a wood worker after moving there. It's their house that comes closest to having a secret passage. Well, more like a secret crawlspace NO I'VE SAID TOO MUCH.

I got to walk in UO's summer 1996 graduation ceremony, though I was one class and my Honors College thesis short of officially graduating (I'd take care of both that fall). UO alumnus Ann Curry, then of NBC News and Today, gave a winning, down-to-Earth speech. After graduating, I returned with Mom and Dad to their home in Dundee, about 30 miles southwest of Portland, to figure out where I'd move next.

Which was Tower Apartments in Hermiston,

in Northeast Oregon's semi-desert 200 miles east of Portland. Home to potatoes, watermelons, and, at the time, chemicals that could have killed us all. I was there for three years, working as a writer-reporter for the Hermiston Herald. Working there taught me that I was a better writer than a reporter. And that I needed to be in a larger metro area than a town of 11,000 surrounded by smaller towns and desert.

Moving back to Dundee at the end of August 2000, I weighed moving to Seattle or Portland, and decided I haven't enjoyed Portland enough. And found a basement room near SE 50th and Hawthorne that I officially moved into on January 1st, 2001.... 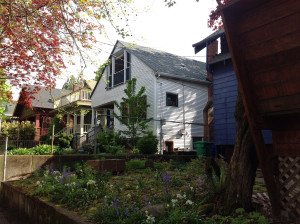 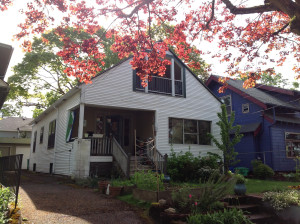 ...then moved out of in August 2002, after confirming that I could not trust at least two people living there. (That could be a long story. I won't get into it here.) I lucked into an apartment in a Brooklyn converted church building that stayed my home for — whoa — 12 years. 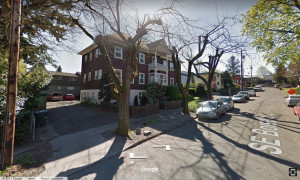 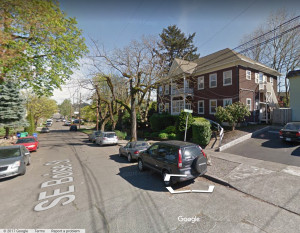 And now, as of June 2014, a room in another house in another part of SE Portland. Where, I'm glad I can say, there's also been much less drama than at the house where I couldn't trust people. (At the Brooklyn apartment, sometimes I'd marvel at how my time living there, as it grew longer, still seemed shorter than my time in the Hawthorne house.) Trust. I definitely know how important it is.

I can still see positives about every place I've lived, even if (like with Hermiston or Virginia) I wouldn't live there again. I haven't lived in any really bad place. I feel very lucky about that. And lucky to know that.

I wrote the several parts of "Pieces of my past" in a jumbled order that allowed me to jump around between eras. I came up with the specific order I'd write in after writing the first entry; as with choosing that particular place to start, I didn't worry too much about the order, other than it felt right and stimulating to write about. All in all, I'm glad I wrote this series of blog entries; they include some thoughts and details I'd never blogged about in my 13 years of blogging. And now, with my postings today, it's done. Want to read it in the order things happened? Here you go.

There was the Virginia Beach house I don't remember at all, followed by the first house I did remember, this one in Rancho Bernardo, on the north end of San Diego.
Then I had my first short stay, in Camarillo, CA of Ventura County.
A year-and-a-half after that move, we did the first cross-country move I actually remembered, to Virginia Beach.
Followed by another home in Virginia Beach.
Northern Virginia turned out to be about as humid as Southeastern Virginia, but in Vienna I simply, finally, adapted to that.
During junior high, we moved to Oakton, VA And, by our standards, stayed a while.
And, as I became an adult, I lived in three parts of Oregon: Eugene in the southern end of the Willamette Valley, Northeastern Oregon out where there are tumbleweed and Oregon Trail ruts, and the Portland area.

More to come, as I still think of other stuff that's blog-worthy...
Collapse