I want to be less quiet.

I'm working to have something to say, so I can be less quiet for a good reason.

Sophie. She was our Yellow Lab from 1990 to 2004. (Purebred, though I never learned whatever her fancy registered purebred name was; to us, she was just Sophie.) She had belonged to a co-worker of my Dad's; the colleague was getting a divorce and moving into a condo and had room for one of his two labs, not both. Luckily, we could provide Sophie a new good home, and in fact for years Dad had wanted to get a Yellow Lab, so...

...in January 1990, she joined us. I took this picture of Sophie in the backyard of our Oakton, VA house. 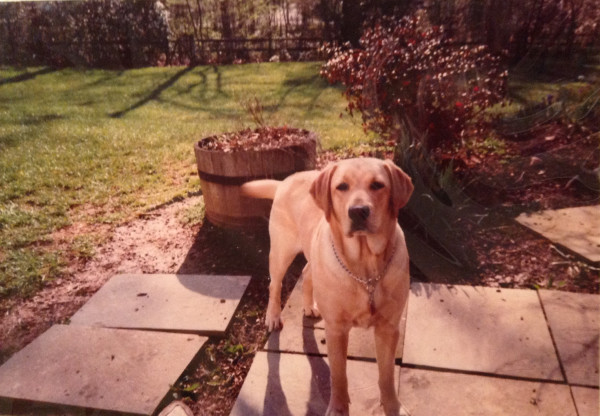 Sophie lived most of her life in Dundee, OR. Here's her at Dundee, later: 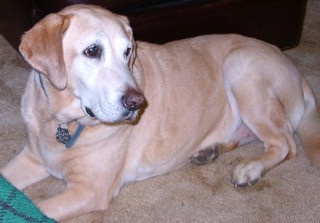 There. Cute dogs are worth blogging about.

I finished a poem today. It had been over a month since I'd finished one. This is inspired by the mural I had in my Oakton, VA bedroom in the late Eighties and early Nineties, during high school.
-
-
-
-
- 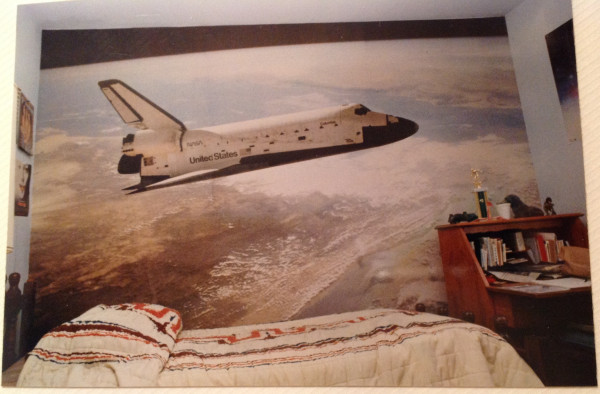 I once rested under a shuttle.
Slept with a hundreds-mile view to my left
Of an atmosphere-clearing truck-bus
Seeming to float, as orbiting objects do,
Above the grass and dust and seas of Earth
— Sicily, at that Eighties-moment when the photo was snapped —
Towards the curve of the world
And a darkness which,
To those aboard that shuttle,
Would have had stars the camera, from that angle, wouldn't get.
A dayside planet's bright.
The shuttle needed a wash. Launching's a messy business,
Hard to do cleanly.
Re-using means scrubbing,
Once (of course) it got back to the ground.
The shuttle was fascinating, and functional,
A flawed workhorse getting us to Low-Earth Orbit
For satellites and science
Over the course of, eventually, thirty years.
Five orbiters, launched. Two of them, lost,
Along with those onboard.
The Challenger, lost first,
Before I got this photo-mural;
The Columbia, later, to be lost.
We knew, from experience, this could occur.
This was hard to think about.
And, mostly, I didn't.
I'd look up, from my bed or my desk or from outside my room,
And quietly marvel instead.
I had a view of a slice of the world.
The astronauts onboard saw far, far more of the Earth
As they passed above it at near-18,000 miles per hour
— they overflew Sicily in less than half a minute —
Above the weather, the currents, the movements of people and animals
As we and Nature used the world.
The astronauts used space
Within and without their shuttle
To test what space and zero-G do to us
And to what we make,
Work now done on the I.S.S.,
Which is able to stay above us.
After this picture of Earth orbit was taken, we added to Earth orbit:
The I.S.S., continuing on its endless curve
That, if all goes well, will never meet the atmosphere.
At the time of that photo,
Mere dozens of people had been beyond the air.
Now, there have been a few hundred.
536, to be exact at this moment,
Halfway to, eventually, one thousand.
I won't be one of them,
Though at some level, I'd hoped to,
My copy of The Space Shuttle Operator's Manual well-thumbed
To remind my younger self "This can be built; this can be learned."
(I never came anywhere near having the math to even consider this.)
Others learned.
I've met a shuttle astronaut,
Looked up to watch a shuttle-space station rendezvous,
Seen an in-orbit performance of a Bowie song,
Viewed more images and videos from space
And of the work in space.
More work will happen there.
More will be done,
Above the world. 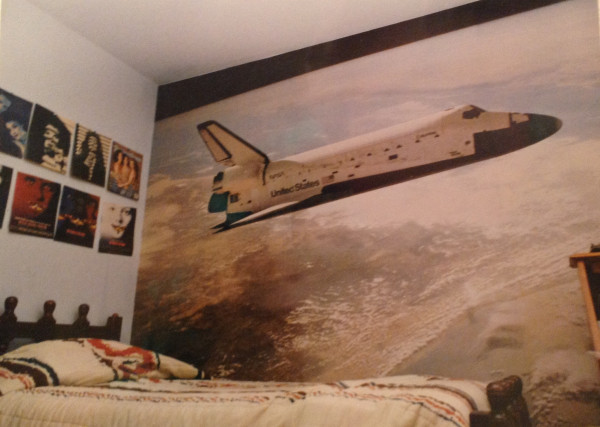 This poem © Christopher Walsh, 2017. Unauthorized use and/or duplication of this material without express and written permission from this blog’s author is strictly prohibited. Excerpts and links may be used, provided that full and clear credit is given to Christopher Walsh (chris_walsh) with appropriate and specific direction to the original content.
Collapse