This is not about Memorial Day, even though I'm posting it on Memorial Day and it's about a memorial.

On Friday on Portland's Green Line Max, a man murdered two men because they tried to stop him verbally assaulting two young women. You've heard. I considered digging up a link to coverage of the killings, but I decided I didn't want to.

The verbal assault, the attempt to deescalate the assault, and the murders all happened on Friday, as the Max train where it all took place pulled into Hollywood Transit Center in NE Portland. About 26 hours later — after the deaths, after the arrest of the attacker — people held a memorial at the transit center. I joined.

TriMet and the Portland Police closed the center to buses, which let people off near the center instead, so that as many people could fit in as possible. Hundreds of people. Maybe over a thousand. They stood in the transit center's grassy knoll, on the roads around the grass, on the steps and the ramp up to the bridge to the Max platform. Lots of people. Lots of sad, angry, hurt people, wanting to do something, even if it was simply to be there as a show of support. 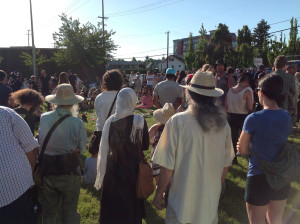 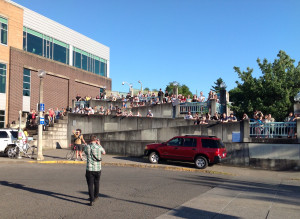 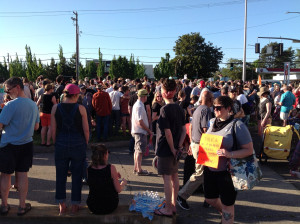 I do not want to say much more; I fear that I risk making this somehow about me, when it's not. I'll end with this: it is good I went. It is good so many Portlanders went, and have left memorials to those we've lost, to others who've been hurt.

And I, and we, have a lot to think about.
Collapse