Portland had a bar called Sewickly's. It's gone now. So is the diner, Sewickly's Addition, that was next to it in the same building. Briefly, the bar was called Sewick's Lounge, an attempt to make it seem classier. I went to the bar a time or two, and to the diner a time or two; plus I know a lot of Portlanders who went to it far more. One time, Tonya Harding supposedly jumped behind its bar and started making drinks. It was that kind of place. It also had the nickname Sewickity's, even though it obviously wasn't spelled like that.

As that link says (unless it's far in the future when you read this and the link's dead), Sewickly's closed early in 2016 to make way for a new mixed-use building. It's since been knocked down. I've seen some of the demolition's progress. This afternoon I was out and about on buses, the last one being the # 14 back to where I live, and I rode it past what used to look like this: 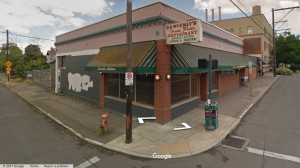 ...and is now rubble. With a hole, under where Sewickly's Addition, the diner part, used to be. And on the north side of that hole, I saw the outline of the stairs that used to go down from the kitchen area to that basement. Ghost stairs. Ghost stairs for a ghost basement.

I never went down there. Of course, neither did most of Portland.
Collapse