Yesterday was a comforting day. Mostly.

I say "mostly" mainly because I wonder if something I ate was a little off, so I sometimes didn't feel that great as the day went on (okay there were a few more bathroom visits yesterday than usual), but: I got out. And on my terms and on my schedule.

After sleeping in and having a late start, I knew I was in the mood to drive, in my own car to places not at the airport. I knew I'd want to eat, get some library time, and buy groceries. Because it was on my way, Carnelian Coffee was my first stop; otherwise I walk there since it's within 10 blocks, but as it was on my way I let myself drive to it for late breakfast. Next I crossed the Ross Island Bridge into SW Portland, onto Barbur Boulevard, and then attempted to get onto Capitol Highway but the turn lane I thought I could take based on Apple Maps satellite view was in fact a turn lane only buses can use. I AM NOT A BUS. So I overshot my planned turn and worked my way back via roads I'd never been on before, near PCC Sylvania if you know Portland geography.

I went down there because I'd decided to have my library time at the Capitol Hill Library, a branch of my county library I hadn't visited before. Me being me, I'll get to all of them one of these days: I've yet to visit three of them, all of them in east county. Capitol Hill, it turns out, is almost exactly the same design inside and out as the Holgate branch, the library nearest to me. That threw me a bit. But. Library time. I got online on one of the desktop computers and got coupons for Fred Meyer, something it's currently easier for me to do on a desktop than on my tablet. (The Fred Meyer app, my usual way of doing this, no longer works on it.)

A little more driving next, up to the Burlingame neighborhood (where Chuck Palahniuk lived when he first moved to Portland in the Eighties, I remember that for some reason) to have lunch at Baja Fresh then buy groceries at the Fred Meyer overlooking the Terwilliger Curves. I did not go on I-5, as it was already busy in the early afternoon. Instead I headed home via the Sellwood Bridge — also busy, but manageably so.

I got back to the house at a good time; Portland was starting to get a rain-snow mix, and later there was a little snow accumulation, including in places I'd driven. But I could stay inside and watch this through a window, not be out in it, as I didn't want or need to be out in it. 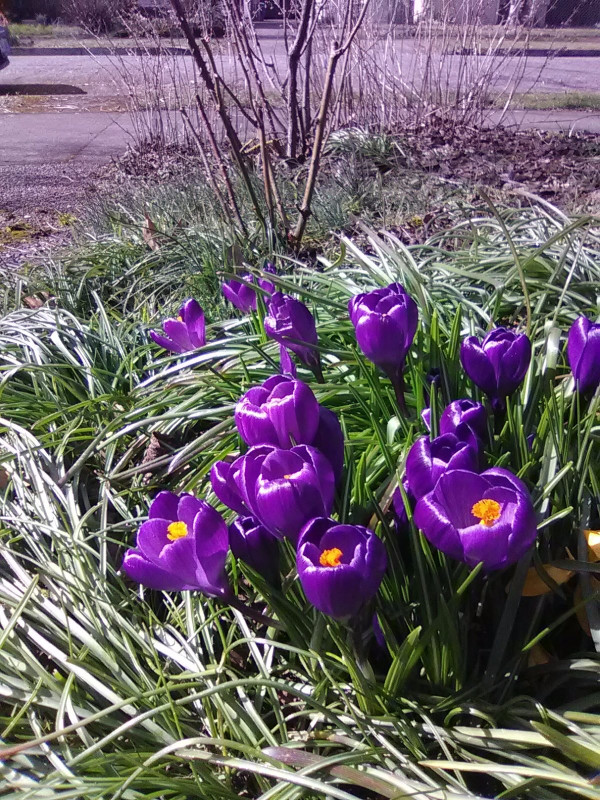