After my work week had gotten off to a...slightly weird start (again, as usual, I'm writing around it and not specifically describing something about my job, as I try to do), I was heading home on the MAX thinking to myself You know, there's that frozen pizza you haven't eaten yet. Finish this work week on Thursday then cook that on Friday. You'll probably have earned a pizza. I liked this idea. Seemed an obtainable goal.

I made it through the work week. This afternoon, I rewarded myself. 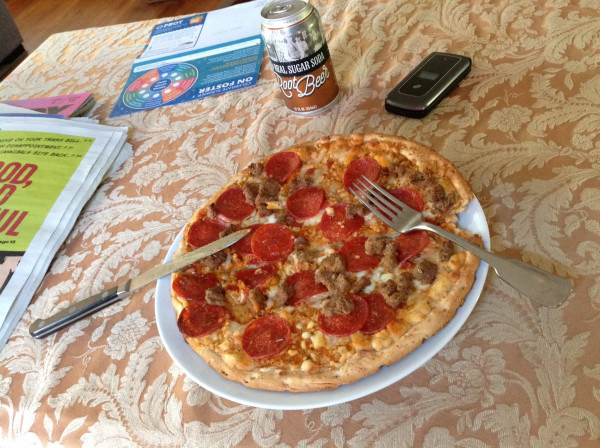 Ate the whole thing. (Though now I'm thinking, slightly tongue in cheek, You think that's impressive? Didn't Steve Prefontaine eat something like two pizzas a day?) That was satisfying. Feels like I earned that. Though later I'll go walking to burn at least some of those calories.

Pizza on Fridays was one of my family's relatively few food traditions growing up. What we tended to eat changed over the years, but up through high school, and whether we had all four of us at home or three because Dad was on cruise or my older brother was at college, Friday night was pizza night. Kit-made from the Appian Way pizza mix, with the box-provided sauce augmented with whatever pasta sauce we had at the time, it was something I could help make (plus I could sneak a bite of some of the dough, which had an intriguing texture before you cooked it, AND NO I NEVER GOT SICK EATING THE BITS OF UNCOOKED DOUGH) and it was fairly easy to make in general.

We made it rectangular, to fit the cooking sheets we used, the sheet greased with margarine. (We'd keep in the fridge a particular margarine cube that we slowly rubbed away, since using the cube that way made it look a little dirty plus you could no longer cut it evenly to add that margarine to a recipe.) The crust was relatively thin; sometimes I'd spread the dough, and early on I'd cause holes while doing so and have to repair it. Then the sauce, then the different sauce, then the basic ingredients of the pepperoni and cheese and sometimes sausage (though we were more likely to add sausage to spaghetti when we had that for dinner), in later years adding slightly more healthy toppings like green peppers. Then the cooking. Then the eating.

It wasn't pretty, but it was tasty. That's probably the best lesson I ever got about cooking: it doesn't have to look good to taste good.

Pizza Friday was different from other nights for me growing up because it was the one night I didn't have to drink milk with dinner. As much as Mom and Dad knew I could use the milk I was getting, they admitted that milk and pizza kind of clash as flavors. So Friday was the one night I could have a soda with dinner: 7-Up, root beer, sometimes Diet Coke (or, later, the caffeine-free Diet Coke, which I preferred to the main Diet Coke), occasionally Squirt.

We'd make enough pizza (usually two pies, if I remember correctly) that we'd have leftovers. Especially in junior high and high school, I didn't like most traditional breakfast foods*, so I ate a lot of leftovers like pizza, as well as things like soup that Americans rarely have as breakfasts.

So. Pizza helped me grow up, to be the strapping lad I am now. Thanks, pizza.

Nicely, I had a root beer chilled and ready for today's pizza, and I drank it gladly with this Newman's Own pizza. I made sure I had enough of an appetite for this; I'd considered cooking and having the pizza for breakfast, but my real breakfast (which I had at Space Monkey Coffee a few blocks away) kept me full enough that having the pizza too early would've been a waste of pizza. (I went on an afternoon walk to burn off some of those calories. Walked past Assembly Brewing, one of the multiple good pizza places now off of Foster Rd., and anticipated my pizza-to-come, and the future good pizzas I'll get from there and other good pizza places.)

Anyway. That was my big accomplishment on this day off.


* As a really young kid my breakfasts sometimes included cottage cheese, or scrambled eggs Mom had made, but the one cereal I most often ate was Special K. Then the company reformulated its Special K recipe, and I liked that a lot less, arrrrrgh.
Collapse