Sometimes I need to remind myself that I can be out at night hours. I'm a homebody, as you've probably guessed, but I wanted to give one of the house owners some time in the house by themselves last night, so I headed out into the sunset light and walked. Then bussed. Then walked more, then bussed more, then I was home and YEAH, GOOD ENTRY, BRO.

I went near those places. I walked around other parts of the neighborhood's north end, noting the changes since I'd first moved there in 2002. (Coincidentally, I thought of Weird Al's song "Bob," a song made up of palindromes because 2002 was a palindrome year and that got him thinking what a song written in palindromes would sound like. He realized it sounded like a Bob Dylan song.) The big change was TriMet MAX's Orange Line being built through the neighborhood, which took a few years and which opened in 2015. The tracks north of Powell, before they cross the highway at 17th Ave., go through an area where there used to be small warehouses, as well as an also-gone pedestrian bridge across the parallel railroad tracks.

What's still there is Southeast Grind, one of Portland's very few 24-hour cafés, at SE Powell and 13th Pl. I've been going there since it was the Fireside Lounge, which opened in 2002 (and where for its first few months of operation, it wasn't quite open 24-7, but that version of the café ramped up to 24-7 as soon as it could). It became Southeast Grind in 2009, and continued to be a place I liked going to. It had been a while since I had, though, so I thought Why not? and stayed there for a bit. I had a toasted whole wheat bagel and a lavender-flavored Italian soda, and read from John Scalzi's novel Head On while enjoying the planets mural on the ceiling: 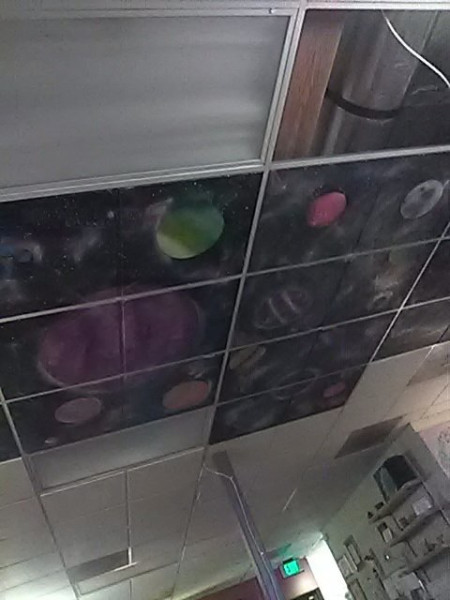 I timed my departure from the café so I could make the next outbound 9 bus down Powell without waiting too long. The night was still cool and comfortable, no jacket or sweatshirt or hoodie needed. There were still hints of post-sunset light just over the West Hills when I headed home.
Collapse