As I do, as Portland is well-built to allow, I walked a lot today in West Portland. I'd been thinking of Northwest Portland and decided to visit. Briefly back in 2000, I'd considered finding an apartment over there; in 2004, I worked for three weeks in the industrial area-facing Montgomery Park, which made a strong impression on me; for a year starting in early 2012, I worked in the same neighborhood's (now-closed) Graphic Arts Center, a print shop. I had some experience with the area.

I started to think I could have had more.

For various reasons in both 2004 and 2012, I was relatively poor. Low on money, that sense of poor. Those were temp job periods for me: mostly a hodgepodge of short-term jobs lasting weeks or maybe just days in 2004, and not-quite-full-time work at G.A.C. in 2012. In both periods, I'd recently been laid off from multi-year jobs (the Vesta call center, 2001-2004; the construction company, 2009-2011) and was scrambling to make up for the loss of those jobs.

And in working or in trying to find work, I was focused on that and not as much on experiencing the neighborhood as a neighborhood. I'd walk or bus through, book in my hand in my backpack so I had reading material, but never more than dabbling in what was around. This wasn't far from the part of Portland that such people as Ursula K. Le Guin, Katherine Dunn (Geek Love), and cartoonist John Callahan called home; Cummins Diesel (where my dad's dad worked for many years) had had its headquarters in that area before that complex and other buildings and lots were cleared for freeway development; around when I worked at G.A.C., the clever TV shows Grimm and Leverage filmed there. I remember walking on NW Thurman in 2012 and seeing it double for a small town Main Street for the episode "The Low Low Price Job." Before that, Leverage had also pretended to blow up a warehouse off of 21st Ave. for an earlier episode; I found that out after the fact, so I never got to see that stunt done live. The neighborhood wasn't part of my day-to-day life; it was just adjacent to it.

Because I was poor-ish, but also because I'm me, the main amenity in Northwest I did use in 2012 was the Northwest Branch of the county library, at NW 23rd and Thurman. It's an especially small branch, but it does a library's job. In 2012 I mainly headed there after work and used its computers or its wifi, then went to the bus stop right outside to get back to home in Southeast Portland. Passing, say, the Freakybuttrue Peculiarium, on a more industrial stretch of Thurman; and Coffee Time, a 21st Ave. café that extends so deeply into its building it feels wonderfully like a Hobbit hole; and Cinema 21, which I haven't attended in years; and so many potentially interesting shops, restaurants, and buildings, and nooks and crannies of an old part of my city.

Ever since I became a full-fledged Portland resident, not just a visitor, back on Jan. 1st, 2001 (that's easy to remember), I've done a decent job of exploring and experiencing Southeast Portland. I can always be better at experiencing other parts. Thus, today's walk.

It felt right to start at the library. 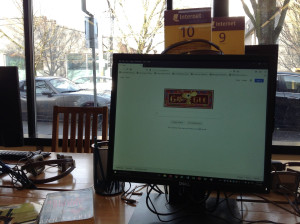