I won't bury the lede: yesterday I was furloughed, as the Port of Portland has closed the airport's valet operation for now. I learned Tuesday afternoon while at work that this was possible and likely; I got word Wednesday; and yesterday I drove to the airport's valet booth, turned in my airport employee ID and my employee parking badge, and picked up my last paycheck.

What happens next depends on the virus, and on how (and how well) we fight it.

But. I began this week honestly not expecting to be unemployed at the end of it. Now things are different. Different-er. Hi, uncertainty: I'm feeling you and so are lots of other people.

I'll post this, then do a more in-depth entry on how this past week's been for me. There'll be a nice photo at the end of that.

Meanwhile, take care, wash your hands, don't wash other people's hands (social distancing, yo), and...do what you can to deal.

As for the rest of this past week? Well...

I vacationed. Really. Seems strange to say in the context of a pandemic, but it's what I did.

I did my best to do it carefully. I dealt with very few people. I spent it almost entirely by myself.

Two weeks ago, I asked for and got permission to take off two days from work, Wednesday the 18th and Thursday the 19th. I had Paid Time Off, I wanted to use it, and things did not look then the way the look now. I didn't think I'd be coming back to a job furlough when I...

Sunday, Monday, and Tuesday, I worked. They were slower days with fewer customers; I spent some time Tuesday cleaning part of the parking garage. Aaaaaaaand...other stuff happened with co-workers in Tuesday, stuff that's not mine to talk about. Putting it most simply, the day was difficult...including when a higher-up person from the company came to the booth that afternoon and told us we were likely to get furloughed soon.

I finished my Tuesday work shift — I'd considered asking to leave early that day, but didn't — and took much-less-rider-filled MAX trains and a bus home. (Sign of the times: the currently closed neighborhood bar had posted on its reader board the messages SEE YOU POST-APOCALYPSE and BARTER TOWN RULES.) In the evening, I drove to my bank's nearest drive-up ATM and deposited a stash of accumulated tip money, so I could send it to my savings account. That's been my main use lately of my tip money from the job. Every little bit helps. Then some pre-trip chores. Then sleep.

Wednesday morning, I did a load of laundry, got take-out breakfast from the coffee shop I go to the most, and started driving southwest, stopping for basic supplies (and, yes, beer) at the Burlingame Fred Meyer. And for the first time since 2007, I drove to Lincoln City to go to a motel room.

Other than stopping at a McDonald's drive-thru to get lunch then checking in at the front desk of the Ester Lee Motel, I didn't interact in-person with anyone else until Friday. I kept my distance from people. Easier to do that in a nicely-appointed motel room with a great view of the ocean. Then I tried to relax.

My relaxing wasn't helped by getting a message on my phone Wednesday night that, yes, the furlough was happening and Friday the valet operation would close. But, yes, I did my best to relax.

Thursday morning, I let myself walk. Down to the beach, south past the Inn at Spanish Head, then taking stairs up the cliff to a residential street so I could return to the motel that way. I later added the photos to my Facebook page, if you'd like to look at those. In the room I read, with the miniseries of Terry Pratchett and Neil Gaiman's Good Omens on in the background; I'd watched the first half of it on Wednesday night.

Friday morning, a little earlier than I'd planned, I packed up, turned in my motel room keys, and hit the road. Only stops I made were to text my parents that I was headed home, then later in Tualatin to get $5 worth of gas so I wouldn't flame out before day's end. Midday, I got back, let my housemates know via email, unpacked, then did the airport errand I'd known I'd need to do.

Thank you for sticking with this entry. Here's a photo of Wednesday's sunset. 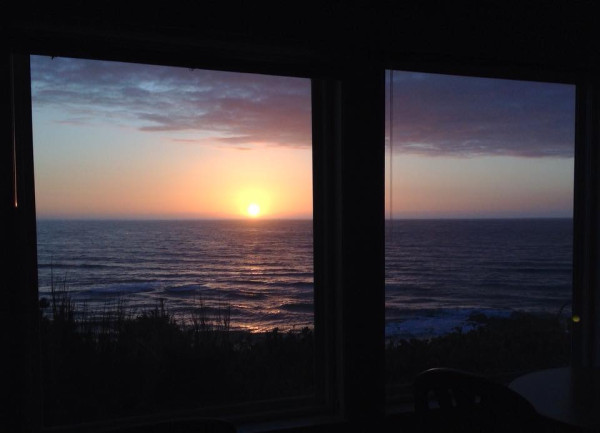 ...I started late. Deliberately; I let myself stay in bed, resting. Recovering from a frustrating dream, for one thing, a dream where a bunch of things of mine broke in increasingly unlikely ways. (In the dream, my flip phone somehow went limp.) It was kind of a relief to wake up and figure out that none of that had happened.

I woke up, showered — as usual, it made me feel more human — and got slightly productive. I walked to an ATM to deposit the paycheck I got Friday, the check with my work and PTO hours from this past week, plus unused personal time (vacation pay and sick pay) the company needed to let me have. It was a decent-sized check, which helps. And now it's deposited. Though several blocks into the walk, I realized I'd forgotten to sign the back of the check so I'd need to make a stop to do so.

(Why walk? With my job (I hope just temporarily) gone, I'm suddenly getting far fewer steps in in a day, so walking up there and back was a good idea.)

I went into WinCo at SE 82nd and Powell briefly, and found a pen at Customer Service, and got out before I spent too much time close to people. THEN I deposited the check.

I tried to make two stops on the way home, at two different coffee shops, but one is already closed (as a sign in the window simply says, "because of the thing") and one had closed early today with a sign noting that it'll close for the duration of this situation after tomorrow (Sunday). There. A little more social distancing, done, I guess.

Then I got home, and wrote, and had a pretty basic dinner of canned soup. The appetizer: part of a can of Pringles. Later, wanting something funny and absurd, I borrowed on Hoopla the funny and absurd monster film Inhumanwich!, which my friend David Cornelius wrote and directed several years ago. I laughed some needed laughs. We often need to laugh.

Now. Tomorrow would have been my day back to work, if my work still had work. Now it's a day off. I hope I'll be productive some ways.
Collapse