(Looking forward to when we all can safely hug again...)

North of Portland, west of Portland, east of Portland and south of Portland, and in other parts of the American West, areas are on fire. Some of them, big fires. Big, worrisome ones. Last night, due to a significantly higher wind out of the east, some of the smoke and ash caused by those fires started to reach Portland. As far as I know, my county, Multnomah, has not yet had to have mandatory evacuations; but parts of Clackamaa, not that far away, have. It's worse farther south in the Willamette Valley: larger plumes than what Portland got last night gave Salem, Eugene, and other cities and towns down there skies that were red, orange, or rust-colored.

Portland, today, was relatively lucky: our air mostly cleared up, though wind kept gusting. Tonight, though, will be another night with a plume. I took these shots a little before 8 o'clock tonight, looking southwest: 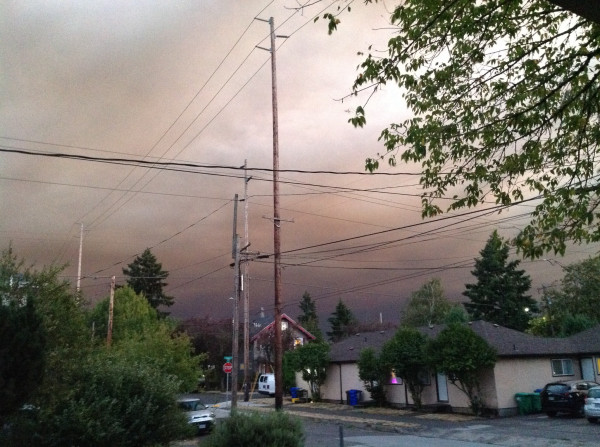 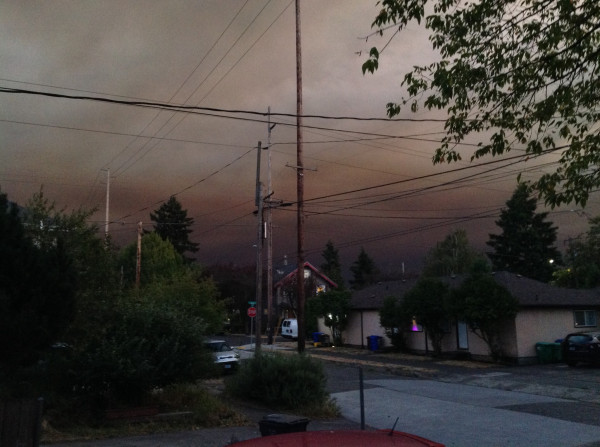 The top shot is unfiltered. I lowered the light level on the second shot when I took it, to get closer to the actual dark color I could see. Neither shot is prefect in its color — and its colors are nothing like the surreal, heavy colors people got to the south — but that's what's reaching us.

I keep calling them "the plumes." I realized what that word choice made me think of: the nuclear fallout a lot — a lot — of people my age believed would, sooner or later, douse too much of the world, like I had anxiety dreams about through the mid-1980s while in grade school and junior high. It's like a dry run for watching for, and waiting through, the end of the world as we know it.

And that is, I hope, a way way way too overdramatic way to put it. Except what if more fires get this big? What if fire danger in America's west stays elevated? What if we can't fix this, and must live with it?

I'm scared, for my part of the United States and my part of the world. I'll brave it — like today, when I went out for errands with a mask on because that's of course already a needed habit during the pandemic, and having masks is an improvement on how I handled the ash-roughened skies Portland got in summer 2017 and summer 2018 —

— and others will brave worse, like the firefighters where the fires are, and the people evacuating from near the fires.

I have to hope we can stop this. I have to hope we can fix this. Going back to my fears of nuclear war: I honestly believe we're safer from that now than we were in my youth, before the Berlin Wall fell. I don't see On the Beach becoming anything resembling a documentary. Don't prove me wrong, world.

Take care and stay safe, as safe as you can.
Collapse